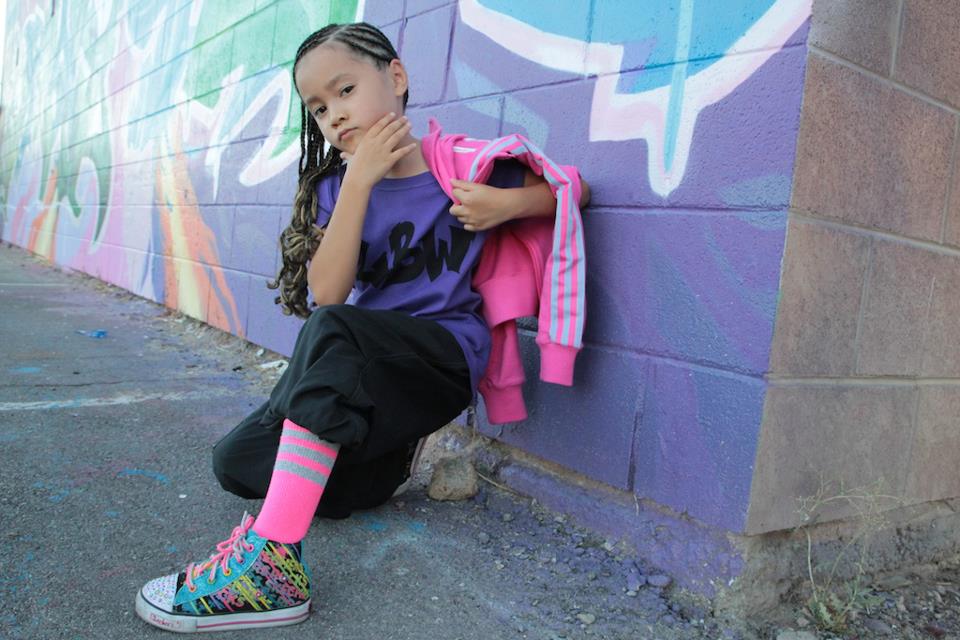 Dance Mogul: How did Ariah get started?

Ariah got started when she was about three years old. Once she saw the Jabbawockeez on America’s Best Dance Crew Season 1 with their iconic masks and unique movements, she knew that dancing was her passion. When America’s Best Dance Crew Season 1 ended, there was no way to see the Jabbawockeez perform so we all decided to watch them on youtube. While watching them, she would study the way they danced and amazingly picked up their movements very quickly. Our next step was putting on the music the Jabbawockeez dance to so she could practice their style and get familiar with the way music feels. She would move her body in a way that we could not understand only because we are not dancers. Eventually, it got to the point when she heard any type of song she would be able to figure out how to move her body to every little beat the song offered. She would dance to every little noise, including water drips, commercials, the sound of the wind, etc…. So as her parents we decided she should practice more by listening to different music and watching online videos.

Dance Mogul: What is the atmosphere like in Hawaii for dance?

Although dance is popular in Hawaii, no one took Ariah very seriously because of her age and the type of dance she does. As parents, we knew she was something different because she didn’t dance like an average child. So we decided that maybe she would be taken more seriously in the mainland, so we decided to move. When we moved to Las Vegas, she started practicing at a studio called Tunay Ink. She had the great privilege of meeting Kevin Brewer of the Jabbawockeez while he was consulting about printing t-shirts at Tunay Ink. She quickly ran up to him and told him that she was his biggest fan. She also told him that she dances to all their music. Kevin was so humbled and pleased to hear that she was his fan and asked if she had any videos of her dancing to send it to him. We quickly emailed him one of her youtube videos and he responded by inviting us to watch the Jabbawockeez show and to meet the rest of the crew. As her parents, we were so ecstatic that her biggest fan took her dancing so seriously. A couple of months later Ariah got to perform with her Idols on the same stage she was inspired by. She made her big debut at the age of 5 on ABDC Season 6 Finale and made a breakthrough in the dance community.

Dance Mogul: At her young age how often does she practice?

Ariah practices 24 hours a day. Her practice is a little different then most dancers. She doesn’t call dancing “Practice” it just comes natural for her. She practices while watching television, eating dinner, or just walking around the shopping mall. When it comes time to perform she choreographs all her routines herself while practicing in our garage. She even made up some new dance moves and gives them names.

Dance Mogul: As mother and father what roles do you guys play in her career and are her siblings in support of her as well?

As a mother and father, we play the biggest role in supporting her. Although it is very hard in the entertainment business, we try our best to follow along. We are new to all these things so sometimes it can be frustrating. We have no idea about dance either, but we guide her through everything.

Dance Mogul: What are some of the hardships you encountered trying to get her exposure?

There are a lot of hardships that we go through in getting her exposure. We write to hundreds of entertainment business and get no response. We believe Ariah is rare and deserves to show people her passion in life, DANCE.

Dance Mogul: What do you feel her big break was?

Her big break was meeting Kevin Brewer and the Jabbawockeez. Without them, she probably wouldn’t be known in the hip hop community at such a young age. Being on ABDC with them is many dancers’ dreams and she got to live that dream.

Dance Mogul: What is she currently working on?

Right now, Ariah is working on a short film with Popping John and a kids television show as one of the main characters. She is also a great actress. Last week she accepted the award with her fellow team, the Jabbawockeez and Super Crew at the Hip Hop International for “The Living Legend”. She got to perform with them once again at the Orleans casino. She also has other dance showcases coming up. Ariah was also on America’s Got Talent this past season.

Dance Mogul: How are her grades in school and do her friends in school know what she does?

Ariah amazingly does well in school. She is actually on Honor Roll for her good grades. She never gets into trouble. She is a very bright student.

Dance Mogul: What would you like your daughter’s legacy to be?

We want her to inspire all dancers especially females and kids to keep living their dream.  We would want her to be the Michael Jackson of Kid Dancers.

Dance Mogul: Anyone you want to thank for helping you, Ariah?

I would love to thank everyone that helped me along the way.  My grandma and grandpa, mommy and daddy for being my biggest fans. Kevin Brewer and family for being there for me through everything. The Jabbawockeez for helping me become one of them and being so supportive of my dance.  Popping John, Haspop, Dezmin Staley, for helping me learn new dance moves.  Kendogg from Indaclutchtv for shooting videos for me just because he believes I’m special.  JoJo from Tunay INK studio.  Dance Mogul for featuring me in your magazine. Biggest Thanks to all my fans out there, I LOVE you!!!

Summer Institute for the Gifted (SIG) at Princeton University