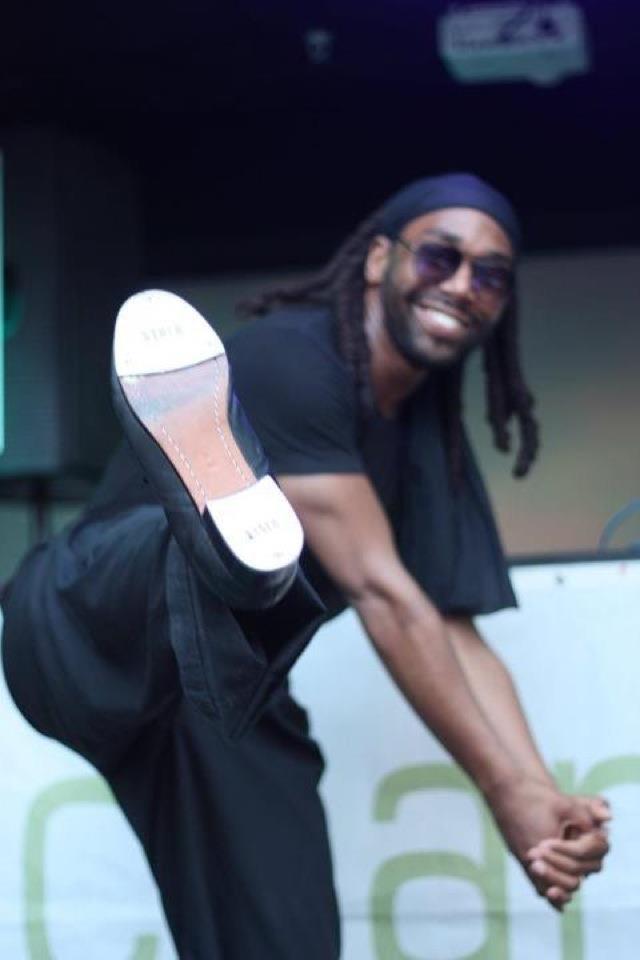 Dance Mogul: What or who inspired you to start dancing?

Calvin Booker: I believe my love for music initially inspired my dancing. It’s still like that for me. Music inspires movement. My uncle, Randy Muller is a musician, of the legendary funk group ‘Brass Construction’, so I was heavily inspired by what I heard him play, and also by what my father played in the house. My older brother was also a hip hop dancer and lyricist, and he would frequently have parties in our basement, so he would encourage me to jump in the center and ‘battle’ his friends…:) In addition, I watched Michael Jackson’s Moonwalker religiously as a child with my friends in preschool, and the interest in Tap Dance came directly from young Savion Glover on Sesame Street and the movie ‘TAP’ featuring Gregory Hines, Sammy Davis Jr., Sandman Simms and a world of other phenomenal hoofers, that I’ve been blessed to connect with on some level.

Dance Mogul: What made you commit to contemporary& Tap and where you looked at differently because of that?
Calvin Booker: I began taking Barre-A-Terre @ Restoration Dance Theater in Bed-Stuy, under the direction of Marie Brooks. This style is classical ballet designed to be executed on the floor, which was good for developing core strength and proper alignment. My incentive to continue training (and be good at it) was the pretty girls @ Creative Outlet: Dance Theater of Brooklyn. We all know women appreciate a man who is good at dancing ..;) Also, it’s a great way to express and use the information I had previously acquired. At the time, I also had buddies who were ‘young men’ that happened to be good at dancing and we were our own competition and support group, much like a football team. More these days, some people, male and female, can forget to include the true essence of who they are in their artistry. As a man, my dancing had a level of masculinity, strength, and sensuality that definitely helped me to be distinct. So, I actually was/am respected more because I was able to hold on to who I truly am through all of the –isms of the “dance world”. And I also got respected for being able to do all the contemporary modern stuff, and then come out and tap dance, which for one reason or another, a lot of people can’t do. Us well rounded straight male dancers are quite the commodity…B) Tap Dancing for me is my outlet to be the musician I always wanted to be, and though I’ve been dancing as long as I have, there’s always something to work on technically, so that you can continue to grow creatively, and so the dance never dies.

Dance Mogul: When did you realize that you had what it took to become a professional dancer?
Calvin Booker: I’d been performing since the age of 7 with my tap group, “The Young Hoofers” directed by Traci Mann. Part of what made this group work was the freedom we had to be our individual selves, in the spirit of the original Hoofers. So we were all very comfortable in our own skin at an earlier age than most, and that gave us the confidence to command any stage we were on, together and solo. Once we all received respect and acknowledgment from the elder hoofers, like Buster Brown, Jimmy Slyde, Chuck Green, Peg Leg Bates, Sandman Simms, Gregory Hines, etc. that certainly helped us claim some validity as young tap dancers. One of our earliest gigs was @ a public school in Queens with the great Chuck Green, who was Traci Mann’s teacher. This was one of the 1st shows we were made to do solos at. We each didn’t know we were doing solos until we were already on stage. Totally sink or swim situation. We all swam. 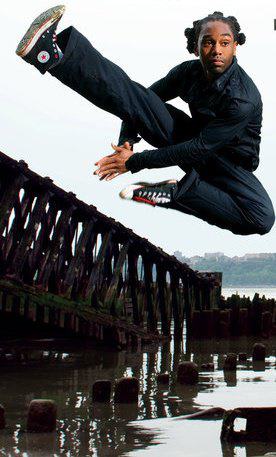 Dance Mogul: What are some things the youth should look out for when pursuing a dance career?
Calvin Booker: You want to be sure to have a strong support base around you. People who you can truly count on to be your friend and encourage you to continue doing what you do the way you do it. That individuality is what’s going to really help in the long run. That includes peers and instructors. That was the magic of the original Creative Outlet. It was SWARMING with so much support and so many different artists and influences, such as Nathan Trice and Desmond Richardson, who are good models for up and coming male dancers, Leonora Stapleton, Shiela Rohan, Whilemina Taylor, Shirley BlackBrown-Coward to name a few. They were all always on us and still are to be the best ‘me’ we can be. We’ve developed lasting and meaningful relationships as a result. Truly a blessing. Also, make sure that you can identify with the work on some level, it helps the ‘joy’ factor if you have an inclination as to what or who you re in the piece. For me, it helps my artistry if I can connect to the work spiritually. And more obviously, whatever institution you choose should produce ‘results’.:)Strong, technical, creative dancers who grow into powerful artists who can carry on the culture and information.

Dance Mogul: What are some of your biggest accomplishments?
Calvin Booker: As a child born, raised, and residing in Brownsville, Brooklyn, I have performed in the presence of Michael Jackson & Katherine Dunham. I’ve connected with their eyes and gave homage. I’ve performed with Stephanie Mills, Phylicia Rashad, and other greats in the production, “Nativity”. I’ve performed at Lincoln Center, BAM, Aaron Davis Hall, Apollo Theater, United Nations. I’ve traveled domestically and internationally, to London, Italy (Spoleto, Florence, & Rome). In fact, I DJed in Spoleto and a club in Florence. I’ve also played in cities of Germany (Chemnitz, Ooberlingen, & Liechtenstein ). I think the accomplishment is more being able to know that these places exist..and saying them correctly ..:) Also, the Young Hoofers were two-time winners @ Showtime @ The Apollo and were featured @ No.8 in Dance Magazine’s “Top 25 to Watch”. I” ve been able to jam as a tap dancer with musicians such as Bilal, Wunmi, Carolyn Harding, and Maritri Garrett among others. I’ve performed and dined in the home of the Ambassador of Benin among international dignitaries. Also, I originated the presence of Tap Dance in the Broadway hit, “FELA!”, directed by Bill T. Jones. I performed the role during the off-Broadway run. It was a good time! I’ve also maintained an internet radio show as DJ CBoogie on http://www.insoulwetrust.com, alongside Carolyn Harding. Together, we’ve also established the “Big Band and Tap Preservation Society”, dedicated to preserving these formative aspects of American culture.

Dance Mogul: Why should the youth value you tap dancing more?
Calvin Booker: The youth should value Tap Dancing because it is an indigenous American art form. As the story goes, Tap was the result of a challenge between the African BootDancers and Irish jiggers, that took place right in New York City at Foley Square. Tap Dancing has definitely evolved through the history of this country and so the way that it is presented now is a celebration and declaration of perseverance. Tap has the ability to adapt to whatever the current trend of music is as well as its jazz and swing roots, helping them to understand to true structure of music and musicianship. Also, Tap is a great physical and mental outlet! We could use a bit more physicality for our youth these days

Dance Mogul: What would you want your legacy to be?
Calvin Booker: I’d like my legacy primarily to be one of light. Someone who loved music and people. I’d like to pass my understanding of Tap on to a nu generation, who will immediately see the thru line between Tap, Traditional African, Jazz, and House music, which encompasses various styles, musically and movement-wise. I also want to resonate as a DJ who really understood the connection to the people, and wasn’t afraid to play ‘other’ stuff that you don’t ordinarily hear in the club, expanding minds and hearts one set at a time. I’m still refining my craft(s), I have some time. Working on a Brooklyn House (music) party, which will feature musicians, singers, and DJs alike.

Dance Mogul: Anyone you want to thank?
Calvin Booker: Primarily the Creator, for my specific time and life path. Truly I have some amazing celestial timing and as a result, I have all these phenomenal experiences, that I need to hurry and jot down before they escape me. My parents for their support and love, my brother for being an early healthy influence. Traci Mann for seeing the hoofer in me and taking time to mold, Jamel Gaines and all my teachers for also continuing to see in me what I sometimes don’t see in myself, Omar Edwards for his world of information on a few levels, by far one of the most dynamic and influential tap dancers in my book, Carolyn Harding, Shockalock for thinking enough of me to submit me for this interview, countless others, also Thanx 4 listening !.