Dance Mogul: What can participants expect from this residency that they haven’t experienced before?
Chloe Arnold: Our residency is going to feel like a ROCKIN’ CONCERT!!! We will be singing and rocking the audience with our feet!

Dance Mogul: How do you continue to grow as an artist while having to give so much of yourself to others?
Chloe Arnold: What feeds me and inspires me as an artist is all of the amazing people I get to work with and give to. They give me the energy I need to continue to pursue my own dreams as an artist.

Dance Mogul: Is there anyone you would like to thank for helping put together this current residency?
Chloe Arnold: I would like to thank everyone at John Jay for working with us! David Covington for telling us about the wonderful residency, Debbie Allen for always being a huge source of inspiration, Ted Louis Levy for being an incredible mentor and director, our tap ancestors for guiding us and my Syncopated Sisters for being open and going on this journey with me. 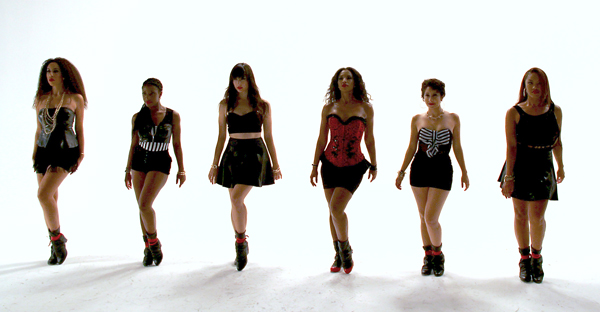 Ephrat Asherie Dance offered a Master Class on Tuesday, September 23 and will offer a free performance on Thursday, October 2 at 7 pm. Chloe Arnold’s Syncopated Ladies will offer a Master Class on Thursday, October 30 at 1:45 pm, and a free performance on Friday, November 7 at 8 pm. Masterclasses and performances are free and will be held at the Gerald W. Lynch Theater at John Jay College, 524 W. 59th Street, NYC. Reservations are required:

Ephrat “Bounce” Asherie has trained extensively in ballet and modern dance but found her artistic home in breaking, hip-hop, and house. Ephrat has performed and taught throughout the U.S. and Europe, as well as in Peru, South Africa, and Israel. She has appeared on NBC, MTV, Comedy Central and at City Center, Carnegie Hall and Madison Square Garden. Ephrat worked on the creation process of the show Magnifico, directed by Andres Heller and choreographed by Pilobolus. She is a regular guest artist with Rennie Harris Puremovement and has worked with Michelle Dorrance, Doug Elkins, Bill Irwin, Cori Olinghouse, Gus Solomons Jr, Buddha Stretch, and Kevin Wynn, among others. Ephrat is an NYFA artist and has received various grants and awards including a Mondo Cane! commission from Dixon Place, a Swing Space Grant from the Lower Manhattan Cultural Council and a Travel and Study Grant from the Jerome Foundation. She was a 2012-2013 Fresh Tracks Residency choreographer at New York Live Arts and a 2013-2014 Workspace Artist-in-Residence with the LMCC. Ephrat received her B.A. in Italian language from Barnard College and is on faculty at Broadway Dance Center and Peridance. For more information please visit www.ephratasherie.com

Ephrat Asherie Dance (EAD) is an urban dance theater company dedicated to exploring a new movement language that combines the rawness of underground styles with a contemporary dance aesthetic. Drawing from breaking, house, hip-hop, and vogue, EAD explores the inherent narrative aspects of these social and club dances, and how they can be developed in the context of concert dance. EAD has had work presented at New York Live Arts, Jacob’s Pillow, the Apollo Theater, the Ahmanson Theater and Dixon Place, among others. EAD’s first evening-length work, A Single Ride, received two Bessie Nominations in 2012 for Outstanding Emerging Choreographer (Ephrat Asherie) and Outstanding Original Music/Sound Design (Marty Beller).

Chloé Arnold is an International Tap Star. As a leading lady in the art form of tap, Chloé has wooed audiences in over 21 countries and 35 states. Her work can be seen on film, television, and stages worldwide. Co-founder of DC Tap Festival and co-director of LA Tap Festival, Chloé’s most recent highlights include a recurring role on HBO’s Boardwalk Empire, choreographing a commercial for Canon, performing at Madison Square Garden for the opening of the NY Knicks 2013-2014 season, working with Beyoncé, guest performing on NBC’s America’s Got Talent, ABC’s Dancing With The Stars and FOX’s So You Think You Can Dance, a sold-out NY run of her One Woman show at La MaMa in New York City, Global Fusion Concert in Dubai, and performing with Chloé’s Syncopated Ladies at the star-studded “One Night Only” Homecoming Gala Concert Cabaret in Washington, DC. Chloé is also an entrepreneur that holds an Ivy League degree from Columbia University. She and her sister co-founded Chloé and Maud Productions and DC Tap Festival. She currently produces a travel web series, Chloé’s World, and is co-producing a documentary TAP WORLD with Hollywood Executive Producer Dean Hargrove.

Chloé Arnold’s Syncopated Ladies are a fierce crew of world-renowned dancers who more than hold their own in this male-dominated art form. They have appeared on the television shows So You Think You Can Dance, Dancing With the Stars, and Glee; Pepsi, Coca-Cola, and Toyota national commercials; the films Idlewild and GI Joe, as well as stages in more than 25 countries.

The CUNY Dance Initiative is a new residency program providing rehearsal and performance space to New York City choreographers and dance companies. CDI was developed in response to the Andrew W. Mellon Foundation’s 2010 report “We Make Do,” which cited the critical need for affordable dance rehearsal space in New York City, and mentioned available performing arts centers and other spaces on CUNY campuses. A successful pilot project in 2013 supporting choreographic residencies and performances on four CUNY campuses prompted CDI to expand its scope.

In CDI’s 2014 season, 11 CUNY colleges in all five boroughs will host a total of 20 residencies. The residency projects, which represent a diversity of ideas, approaches, and styles, will take place between July and December 2014. In addition to providing space for artists to create work and rehearse, all of the CDI projects include programs for students, masterclasses, open rehearsals, etc. and in most cases, public events such as lecture-demonstrations and performances.

About the Gerald W. Lynch Theater at John Jay College
Since opening its doors in 1988, the Gerald W. Lynch Theater has been an invaluable cultural resource for John Jay College and the larger New York City community. The Theater is dedicated to the creation and presentation of performing arts programming of all disciplines with a special focus on how the artistic imagination can shed light on the many perceptions of justice in our society. The Theater is also a member of CUNY Stages, a consortium of 16 performing arts centers located on CUNY campuses across New York City.

The Theater has hosted events in the Lincoln Center Festival since its first season in 1996, as well as, New York City Opera, Great Performers at Lincoln Center, Gotham Chamber Opera, Metropolitan Opera Guild, and Alvin Ailey American Dance Theater/Ailey II. The Theater has also been the site of many television and film specials including A&E’s Live by Request, Comedy Central Presents, and Premium Blend, Robert Klein in Concert and VH1’s Soundtrack Live.

For directions to the venue and more information, visit www.jjay.cuny.edu/theater

Amaru Lewis | I Wanted to be Somebody