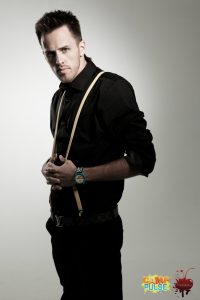 Dance Mogul: What inspired you to start dancing?
David Moore: I grew up in the boy band era of Nsync and Backstreet. Their elaborate music videos and Awards show performances with like 30 dancers first caught my eye. But the funny thing was I wasn’t so much interested in the boy band itself but more I wanted to know who made up their dances and taught them. I later found out about Wade Robson and started avidly following his career and learning anything he choreographed off of my TV and DVDs.

Dance Mogul: Did your family and friends support you?
David Moore: In Orlando where I grew up, at the time dance wasn’t a huge part of television and entertainment like it is now. So my friends didn’t really understand. My parents definitely wanted me to stay in Orlando and finish college when I told them I wanted to move to LA their initial reaction wasn’t too excited. Actually took a couple of years for them to really accept and support my chosen career path. Now they are 100% behind me.

Dance Mogul: What was your first big opportunity?
David Moore: Since I was such a huge Wade Robson fan I saw he was having auditions in Atlanta (close to Orlando) for a dance TV show on MTV called the Wade Robson Project. I jumped in the car with a couple of friends and drove to Atlanta. Auditioned for the show and made it on. They flew me to Los Angeles for the tapings. I ended up getting to the finale show where I placed 4th out of 1,000’s of dancers that auditioned. Not to mention working with and becoming friends with Wade, who I had idolized, throughout the process of shooting the show.

Dance Mogul: What made you different from other dancers?
David Moore: I think because I never really trained in dance before I started. I almost accidentally had my own unique style only because I had never taken the class. So a lot of what I was doing was just a mixture of what I had seen on TV and what created in my own head. I have always been a huge fan of the creation process, which I think is why I was drawn to choreography so quickly.

Dance Mogul: Do you feel anything you were doing inspired things you see now in the dance community?
David Moore: In late 2009, I released a video trilogy that I choreographed and directed with my friend Bryan Tanaka called the Hook vs Bridge Trilogy. It was a 3 episode concept dance video that took us almost 2 months to put together. At the time there were really no dance concept videos on youtube. Soon after this release, many videos started being released in which choreographers had a concept and wanted to tell a story with video alongside the dancing. Concept videos on Youtube are just crazy now! Ive loved watching it evolve.

Dance Mogul: What are some of your notable accomplishments?
David Moore: Dance Double for lead actor in Step Up 3D
SYTYCD Ukraine Choreographer/Judge for 3 seasons
Macy’s Dancing with the Stars
Directed/Choreographed Kidzbop World Tour for Disney
Directing the Monsters of Hip Hop Show 2010

Dance Mogul: What are you currently doing to move the culture forward?
David Moore: I think with the advancement of the DSLR cameras we can really create our own music videos and concept videos to look the same quality as videos out now for major recording artists. Since directing is something I have always been interested in, I have managed to link up and direct videos with/for some pretty awesome people. In 2011, Shaun Evaristo and I got together to start creating a campaign of videos for the movement lifestyle tour that he was putting together. We had a plan to have every video be no cuts and choreograph the camera movement along with the choreography, changing angles and formations all the time so there was never really an actual front. Soon After the first Commercial dropped (theTour Commercial: Shaun Evaristo edition) Youtube started to be flooded with this same kind of videos, that video in my eyes definitely started a movement.

Dance Mogul: What advice would you give the youth to help them be successful?
David Moore: Find your own niche. Have your own style. In the dance community right now there are a lot of dancers/choreographers with basically the same “style” Which after a while gets boring. If you have a style that is only unique to you people are gonna want to see that and they will appreciate it. It’s refreshing to see. Also, use social media to your advantage, it’s the best form of free advertising.

Dance Mogul: What do you want your legacy to be?
David Moore: I want to create something in this industry that withstands the test of time. Something that will outlive me. A piece of work that is timeless. Still searching but that’s the journey of an artist right.  🙂

Dance Mogul:  Is there anybody you would like to thank?
David Moore: All my friends and family and everyone who has supported me
along the way. Millennium Dance Complex, Clear Talent Group, Movement Lifestyle.