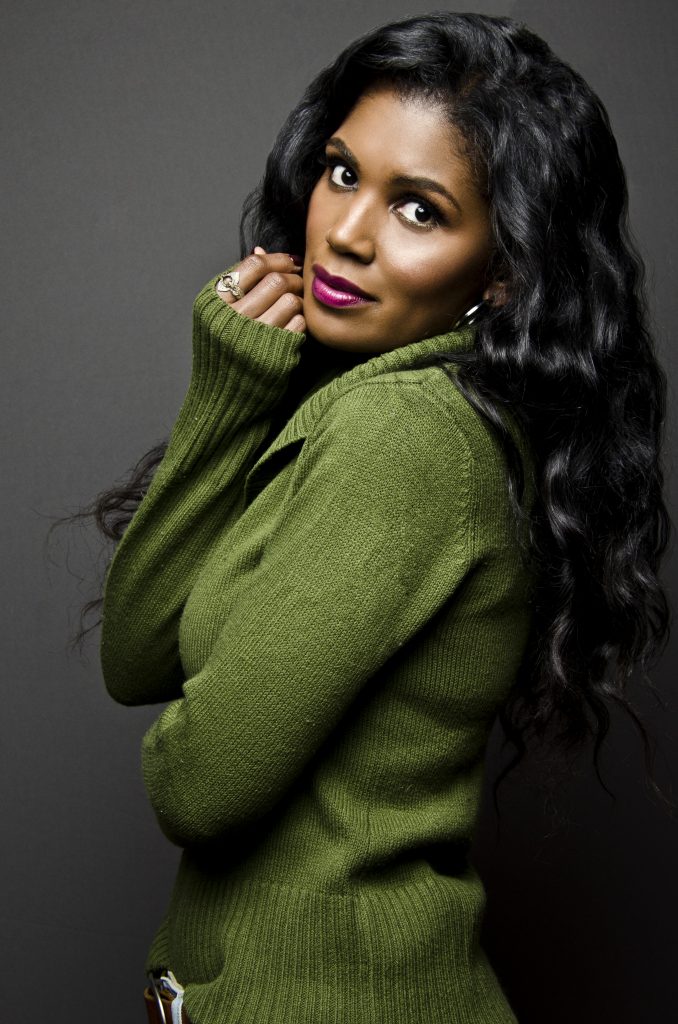 Dance Mogul: What inspired you to get into the arts?

Denise: Well, acting chose me. I’m a true Capricorn, meaning that I’m practical. I like to plan, control, and predict. This business, for the most part, offers you anything but the opportunity to do that. After “falling into” acting, all I know is it just felt right. It was so invigorating! Acting was this amazing free-fall that offered my spirit a creative awakening I hadn’t felt since childhood.

Dance Mogul: How did you develop your craft?

Denise: That’s a long story! I took my first headshots with actress, then singer/photographer Suze Lanier, while still conquering the world of advertising in Dallas, Texas. She expressed that she recognized something “special” in me, encouraged me to move out to California, offered me a place to stay and made good on a promise to introduce me to her dear friend, the late great casting director, Fran Bascom. Fran quickly became my dear friend as well, casting me in a slew of roles for Days of Our Lives. She soon introduced me to James (the iconic Abe, on Days of Our Lives) and Lissa Reynolds, who to this day, own and operate the Fremont Centre Theatre in Pasadena, California. Within a month, an understudy role became a full-time commitment, which then manifested into my portrayal of Rachel Robinson, trailblazing wife to baseball hero Jackie Robinson in National Pastime. I also got the honor of performing for her and several members of the Robinson family. There are no re-dos on stage! Being surrounded by a talented cast of beautifully sincere veterans allowed me to explore and discover my skills in a safe, intimate environment. I so desire the opportunity to grace the stage of live theatre again. I can. I shall. I will. No doubt about it!

Dance Mogul: What were some of the obstacles you had to overcome?

Denise: Half the battle is perseverance. The world of entertainment, just as life in general, can be a cycle of peaks and valleys. Time has taught me to stay positive through the valleys, plant healthy seeds while there, nurture with a “glass half full” mentality, then trust and believe that another upswing is inevitable!

Dance Mogul: When was your big break?

Denise: The “big break” title would go to Tyler Perry. During my Meet the Browns call-back audition, Tyler himself read with me, then shook my hand and offered me the role of Sasha and Trina in Why Did I Get Married. In a state of shock, I muttered through tears, “My Momma is gonna be so happy!” The kicker? Once I composed myself and called my manager to re-enact the moment, I ended it with, “I sure hope Tyler agrees” not realizing that was Tyler Perry! Until then, I was only familiar with him as Madea. Have Mercy!

Dance Mogul: What motivates you to accept and play the roles you have played?

Denise: Opportunity certainly does meet preparation. It seems that every time I’m presented with a role, there’s a story or individual I’ve met either first hand or through another, that I can tap into as reference. Acting is about being. It’s about truth. For me to properly breathe life into the characters, the last thing I can do is judge.

Dance Mogul: What can you tell us about your latest project Media and the character you play?

Denise: Set in Atlanta, Georgia, Media focuses on the Jones family, who owns and operates JUMP, a dynasty that has dominated the national, urban media scene for years. Between affairs and conspiracies, backdoor deals, fierce rivalries and even murder, the Jones family is doing everything they can to stop anyone or anything trying to tear them apart. This is none other than media mogul, Cathy Hughes’s passion project. In it, I’m honored to portray Danielle Jones, who is married to Brian White’s character, Michael Jones. We are described as the perfect “power couple”…that is, until his plans of leaving the Atlanta prosecutor’s office, to run for mayor are derailed when his Mom (Penny Johnson Jerald as Jackie Jones) asks him to run the family empire. Don’t let Danielle’s “supportive wifey” act fool you, as she’s making professional moves of her own and is currently under consideration for partner at the law firm. Stay tuned! The series will be coming at you later this year! 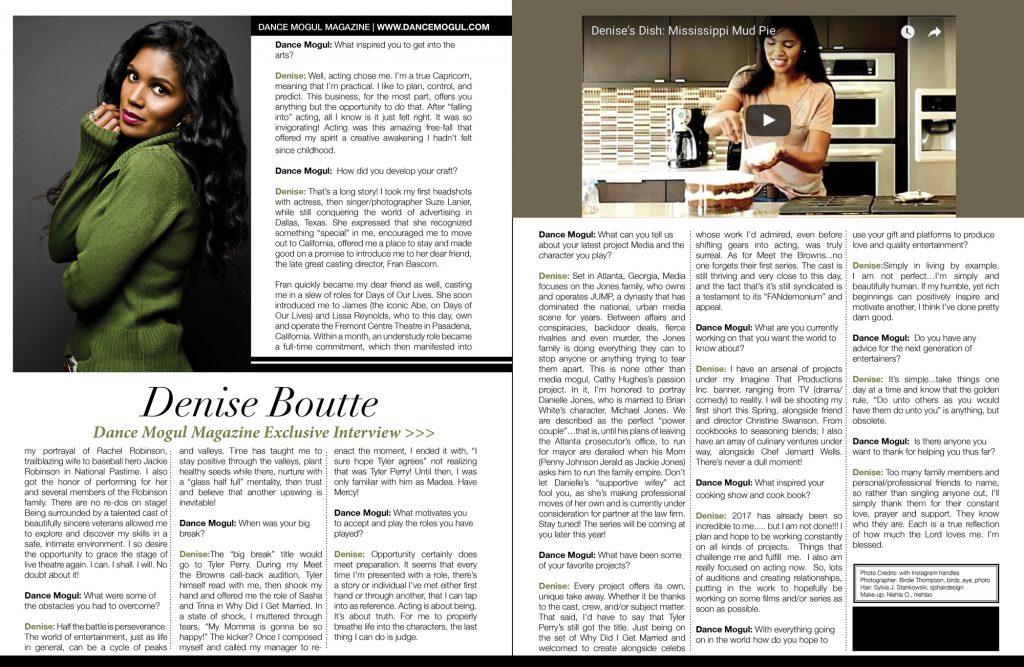 Dance Mogul: What have been some of your favorite projects?

Denise: Every project offers its own, unique take away. Whether it be thanks to the cast, crew, and/or subject matter. That said, I’d have to say that Tyler Perry’s still got the title. Just being on the set of Why Did I Get Married and welcomed to create alongside celebs whose work I’d admired, even before shifting gears into acting, was truly surreal. As for Meet the Browns…no one forgets their first series. The cast is still thriving and very close to this day, and the fact that’s it’s still syndicated is a testament to its “FANdemonium” and appeal.

Dance Mogul: What are you currently working on that you want the world to know about?

Denise: I have an arsenal of projects under my Imagine That Productions Inc. banner, ranging from TV (drama/comedy) to reality. I will be shooting my first short this Spring, alongside friend and director Christine Swanson. From cookbooks to seasoning blends; I also have an array of culinary ventures under way, alongside Chef Jernard Wells. There’s never a dull moment!

Dance Mogul: What inspired your cooking show and cook book?

Denise: Cooking is a part of my DNA! I grew up just a bike ride away from my grandparents’ farm and that simplistic survival was centered on family, food and fun. You can celebrate, you can mourn, you can connect, it doesn’t matter…food will always be the common denominator.

Dance Mogul: With everything going on in the world how do you hope to use your gift and platforms to produce love and quality entertainment?

Denise: Simply in living by example. I am not perfect…I’m simply and beautifully human. If my humble, yet rich beginnings can positively inspire and motivate another, I think I’ve done pretty darn good.

Dance Mogul: Do you have any advice for the next generation of entertainers?

Denise: It’s simple…take things one day at a time and know that the golden rule, “Do unto others as you would have them do unto you” is anything, but obsolete.

Dance Mogul: Is there anyone you want to thank for helping you thus far?

Denise: Too many family members and personal/professional friends to name, so rather than singling anyone out, I’ll simply thank them for their constant love, prayer and support. They know who they are. Each is a true reflection of how much the Lord loves me. I’m blessed.

Keep up with Denise @