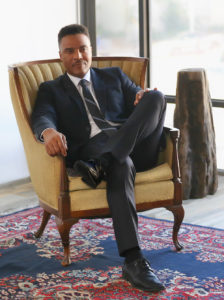 Frank Gatson, Jr.’s directorial influence on the modern music scene cannot be overlooked. His background in dance paved the way for a deep understanding of how the medium can be expressed in all the visual arts, particularly moving images. Frank has a long history of working both in front of, and behind, the camera. Armed with a Masters in Theatre and Dance from the University of Wisconsin, he toured the world with Up With People, appearing in several Super Bowl halftime performances. As a ‘dance captain’, Frank began his directing career managing the show itself. He later moved to New York to study at the Broadway Dance Center and with Alvin Ailey. Frank’s directing career was influenced early on by his work with Michael Jackson, working with the King of Pop on his Smooth Criminal video. This led to many opportunities, mostly on the West Coast, where he would be tapped to choreograph video and live projects for the legendary EnVogue, particularly My Lovin’ and The Funky Divas Tour. Frank has always been a passionate and enthusiastic artist, actively pursuing projects not only as a creative director and choreographer but as a music video director, too.

As EnVogue exploded in popularity, Frank developed a unique directorial vision, the signature style of a true artist that caught the attention of Sony Music, who was in the early stages of developing Destiny’s Child. Frank became their creative director and choreographer, and Destiny’s Child became a huge success. Frank also began directing music videos, quickly building an impressive resumé, which included Trisha Covington, Smooth and R Kelly. He has either choreographed or acted as creative director to such stars as Vanessa Williams, Debbie Gibson, Maxwell, Seal, TLC, Mary J. Blige, Tamar Braxton, Ciara, and has overseen the live stage performances of Fantasia, as well as several Kennedy Center Honors events. He has worked closely through the years, on various projects, with Diana Ross, Usher, Tyrese, Toni Braxton, Debra Cox and New Kids On the Block and, of course, the great Michael Jackson.

To date, he has choreographed and directed over 300 music videos. Frank has also managed to amass a substantial body of television commercial work, with brands as far ranging as L’Oreal, Tommy Hilfiger, Armani, American Express, Samsung, Pepsi, Converse, The Gap, and Reebok. This aspect of his career was jumpstarted by a 40 minute long center-stage feature on the Oprah Winfrey Show, an appearance for which Frank is particularly proud. As a film director, Frank’s personal dream is to bring back the movie musical on a grand scale, just as it was in the 50’s and 60’s. His understanding of the history of dance movement informs his deep creativity and love for the great musicals of the past. As a result, it only makes sense that feature films would come to embrace his talents. Some of the many movies he’s collaborated on are Living Out Loud, starring Danny Devito and Queen Latifah, The Blues Brothers 2000 (specifically the famous “Respect” number with Aretha Franklin), the Disney movie, Hercules, as well as the highly lauded independent film, Leave It On The Floor, with Ephraim Sykes. Through his directing career, Frank continued to creatively develop Destiny’s Child and, of course, Beyoncé, once she embarked on a solo career. Frank was there every step of the way, helping her transform her image from urban street act to glamorous diva. Frank’s attention to detail is legendary, nothing escapes it; whether directing a music video, a huge national television commercial or collaborating on a major motion picture, every creative detail is considered. During Beyoncé’s rising success, Frank also directed Tina Turner, Mariah Carey, Christina Milian, Mario, Usher, Nelly Furtado, NeYo, Brandy, Monica, Kelly Rowland, Michelle Williams, and Kanye West. He choreographed several videos for Rihanna, including SOS, Only Girl, and Unfaithful. These clips were so well-received, he was tasked with creating Rihanna’s entire promotional tour. After 15 years of working closely with Beyoncé, developing iconic gestures like the ‘Uh-Oh Dance’, ‘To the Left, To the Left’ and ‘Single Ladies’, Frank was asked to co-direct her I Am Tour in 2009, which went on to become the best selling music DVD of 2010, and for which he was nominated for a Grammy Award in 2012. At the beginning of 2013, with Beyoncé in full promo mode for her new sold-out Mrs. Carter tour, Frank acted as Beyoncé’s creative director for her amazing Super Bowl Half-Time Show, her legendary H&M campaign, and her award-winning Pepsi commercial.

As a director, one of the many strengths Frank has honed over the years has been his curiosity and his adaptability to different genres. A perfect example is his involvement with the Grammy-nominated country band, The Band Perry. Frank started working with the group in 2012, and the band’s popularity has since grown exponentially, particularly fueled by their slick and polished live shows personally directed by Frank. Frank became the first R&B/Pop creative to join the country music world, a world far removed from anything he’d done before. Because of his ability to adapt his skills to any talent and situation, he was able to put his stamp on The Band Perry’s show-stopping performances at the best country awards ceremonies in North America: Academy of Country Music Awards 2012/13, Country Music Awards 2012/13, Billboard Awards 2013, Country Music Television Awards 2012, American Idol 2013 and Canadian Country Music Awards 2013. To top it off, The Band Perry just won a Grammy for Best Country Band in 2015. Frank re-designed, from the ground up, the 30 year-running Jubilee Show in Las Vegas, acting as creative director, working with the very best and most enthusiastic performers out there. He also acted as chief creative director for Jennifer Lopez on her latest work with her Booty video and performance at the AMAs, Fashion Rocks and her 2015 NYE Concert at Caesar’s Palace. Frank was also instrumental in Kelly Rowland’s comeback with fresh RnB singles and videos for Down for Whatever, Lay it on Me, Motivation, and What a Feeling. He also worked closely with another major talent, Brandy.

Frank is also a manager, overseeing the career of recording artist, Luke James, currently signed to Island Def Jam. Luke James has been nominated for two Grammy Awards and two Soul Train awards and has opened for Beyoncé’s Mrs. Carter Tour in both Europe and the USA. He’s also co-starred in a Black Nativity, a movie with Angela Bassett and Forest Whitaker. Frank’s work with developing talent is legendary in the business. In addition to Luke James, he’s managed Tyrese Gibson, and was deeply influential in the early stages of Usher’s career, developing his tours and conceptualizing many of his music videos, among them You Make Me Wanna, You Remind Me and My Way. Frank’s passion and love of dance is only equaled by his unwavering commitment to the art of the moving image, and how it can capture the energy and vitality of the human form. As a director, Frank’s vision of performance, dance, and storytelling through movement, is unequaled. Throughout his glittering directorial career, Frank has won seven MTV Awards, most recently for Beyoncé’s Run The World video, and three MVPA Awards with both Beyoncé and EnVogue. He also worked with Jennifer Lopez on her video On The Floor, as well as Coldplay’s Charlie Brown video. He was recently featured on the CNN special The Ones To Watch which aired before millions of people and has had amazing feedback around the world. He is also currently featured on Chasing Destiny, a BET Network show with Kelly Rowland which began airing in April 2016.

Frank’s influence on pop culture is wide and deeply felt. He has had a hand in so many influential acts, tours, clips, and performances that he has earned the reputation as a supreme professional, a world-class choreographer, and above all, a brilliant director. The talent he has nurtured, discovered and showcased throughout his career is legendary.