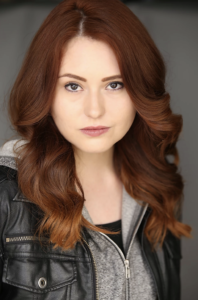 Born in Portland, Oregon, Jillian Clare has appeared on both the big and small screen in numerous projects including her double award winning portrayal of pre-teen ‘Abby Deveraux’ on NBC’s Days Of Our Lives and her most well-known character on the silver screen was in the hit Nickelodeon Victorious film Freak the Freak Out as Tori’s rival, Haley Ferguson. Recent films include starring roles in The Kitchen, alongside Bryan Greenberg and Laura Prepon, plus the recently released faith-based holiday feature, By God’s Grace. Miss Clare also stars in Alien Abduction by famed producers Lawrence Bender and Mike Fleiss for IFC – their highest grossing film to date. No stranger to the stage either, Clare’s background includes lead roles in musicals, original pieces, and iconic plays. Fall 2014 brought another dimension to Jillian’s theater experience as she starred in Delusion: Lies Within – the pioneer production of horror theater produced by the Tony Award Winning team, Glendell Entertainment. Jillian also starred in the 2016 production of Delusion: His Crimson Queen.

Dance Mogul: What can fans expect in the sequel that was completely different from the first film?
Jillian Clare: The humor in the second film has definitely aged up with the kids. We kept all the original cast, plus added more, so we really wanted the audience to feel like they’ve grown up with them. Of course, there’s lots of dancing, but we also have some amazing singing and even a little Shakespeare!

Dance Mogul: How important was it to make a young dance movie that is authentic to the times that young people are in today?
Jillian Clare: Dance is a beautiful art that has been around forever, and I think it’s important to show kids of today’s age how wonderful it is. With the rise of Instagram and TikTok, dance has become much more prevalent on social media, and I love that we are showing how it fits into their lives.

Dance Mogul: How was it working on and shooting the choreography?
Jillian Clare: Filming in a dance studio is always a challenge with so many mirrors, but we worked it out! We had an awesome location called The House in Agoura Hills that served as our dance classroom in the film and our rehearsal space. Our lead choreographer Emily Lutes (she also plays Frankie in the film) is so incredibly talented and really brought it! Gabe de Guzman also choreographed his duet with Jayden Bartels in the film, and it’s easily one of the coolest sequences! He’s an amazing artist.

Dance Mogul: What do you hope fans take away from this project?
Jillian Clare: Follow your dreams and be kind while doing it! These films are all about teens doing what they love, and that’s why I love them!

Dance Mogul: Is there anyone you’d like to thank?
Jillian Clare: SO many people! My mom and co-producer/writer Susan Bernhardt, my father, sister, and niece. My best friends Ian and Sarah, who listen to me, work things out, and are always there to help in any way possible. And of course, our entire cast and crew who worked so hard to bring this movie to life. Everyone put their heart and soul into it, and that’s why I love film making.