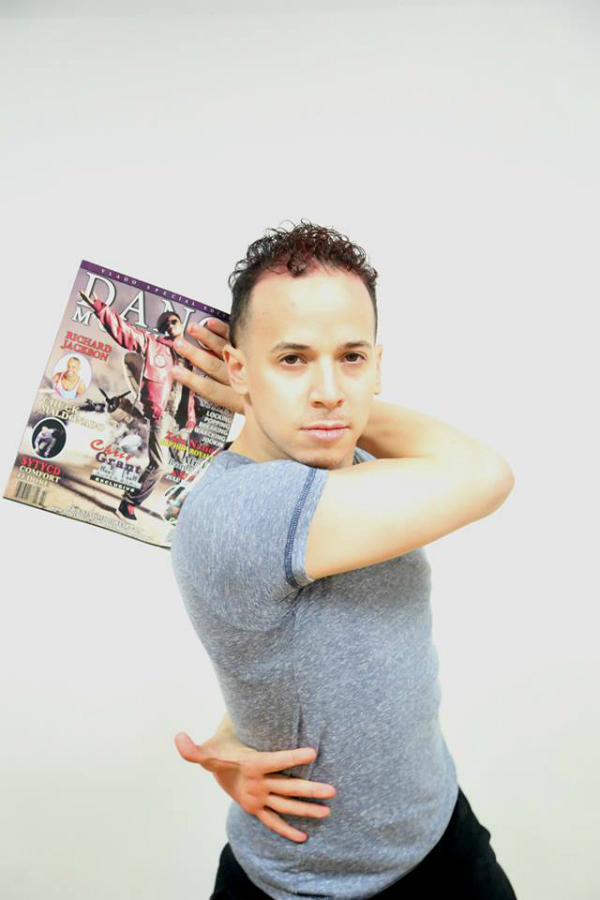 At first glance, all you may see is a dancer, but what Dance Mogul Magazine sees is a triumph. We all have experienced some form of bullying, whether when it was when we were young on even as adults. It is something that affects people in many different ways and sometimes scars people for life. When we first met Joseph all we saw was a pleasant, well mannered young man that loved to dance. We had no idea that an interview would lead to the story that we received. For anyone that has ever been bullied for any reason, this interview is for you. To let you know you’re not alone, you do matter and you do have a place for your voice to be heard. Joseph is a Zumba® Fitness instructor and a member of the Worldwide Iconic House of Ultra-Omni as he is also known as JOJO UltraOmni. Be Inspired, be Empowered.

Dance Mogul: How did you develop a passion for the arts?
Mr.Romanoff: My late-father, Eugene Ara Romanoff (R.I.P. April 24, 1935 – August 5, 2005) was a passionate actor. He would rehearse a lot at home, in a park and other places for his projects.  He did a lot of stage, tv, commercials, and films from Oliver Twist, Lil Abner, to Fiddler On The Roof, Troma’s War, Toxic Avenger Part II and III and so much more. He tried to get me involved when I was young as a Muppet Baby (Waka! Waka! ^_^), but I was too shy with a ton of dramatic stage freight and so he settled to have my little sister, Lynnette, and I do extra work as he had featured roles to take care of. Doing extra work was like our Daycare Center. HAHA! Regardless of my stage freights, I have always dreamed of being on stage, tv, and film while being loved by the entire World. Around my Junior Year in High School, I came out that closet, “Dad, I want to be an actor!” He was so happy to hear that come out my mouth and he taught me how to find an agent, build my entertainment resume and advised me to not limit myself and I was honestly a bit closed-minded at the time, but that was an insecurity I was able to annihilate, eventually. There are roles I still refuse to play, such as bad stereotypical roles, unless there is a very Humanitarian purpose in doing so, but the more open-minded I allowed myself to be, the more I was able to understand and appreciate all kinds of artistic expression. I just never expected I’d fall in love with Dance, but here I am on Dance Mogul Magazine. My passion for the arts blossomed when I moved back to New York City from Lebanon, Pennsylvania in January 1998. I was attending and graduating from Manhattan Comprehensive Night And Day High School, from the last half of my Junior Year, located very close to Union Square. If any of you have not been to Union Square, you are missing out, especially if you are an artist. Art dominates Union Square Park! Street Painters, Dancers, Spoken word Poets, you name it! Stopping by to spectate all this before heading to school was so unique to me. How could someone not get dazzled and adored by anyone willing to unpeel their skin and show who they are through their art without self-judgment? The most beautiful thing to realize about true art. Art that I feel very happy to be apart of. 🙂 <3

Dance Mogul: Were your parents supportive of your passion?
Mr.Romanoff: Since I pretty much answered about my father in the first question, my mom supports anything that makes me happy as long I am not smoking crack. ^_^

Dance Mogul: What made you come to NYC?
Mr.Romanoff: I could not take living in Lebanon, Pennsylvania anymore. I was constantly bullied ever since I moved there in the Fourth Grade of Southwest Elementary School to even after I temporarily dropped out of High School after the first semester of my Junior Year. From my Sophomore Year in Lebanon High School, I was Gay Bashed almost every single day from the name-calling, the wishing of me being dead and even getting spat on. At that time, I was extremely challenged being able to see if I was of any great worth as I was very suicidal and hospitalized twice for it. It was hard to even think of returning to a school to imagine everyone humiliating you by constant gay-bashing in front of my little sister, Lynnette. My dreams of being a star someday are what honestly kept me going and, even more so, my Godmother (Tita Charitte) who invited me to stay with her in Manhattan so I can achieve my High School Diploma. Although, her landlord did not allow anyone to live with her if they were not mediate family members so I moved with my aunt (Tita Nena) in Brooklyn. Those two saved my life. To this day, I choose not to be a victim of my past anymore, but it is challenging at times as all that bullying has really conditioned me to still question my self-worth when things seem to bomb, but I’m a kicka** fighter. I will not be ripped apart that easily, anymore. I still visit Lebanon to see my mom. It is still sad that a lot of the people in that town are still demonstrating their ability to undermined the respect of the GAY Community. I continue to chant for them.

Dance Mogul: What are some ups and downs you have encountered that if you had time to mentor someone that you can help them avoid some pitfalls?
Mr.Romanoff: Oh man. The first thing, on the top of my head, would be to really get to know who you wish to hook your connections up with. KNOW THEIR WORK ETHICS! It does not matter if he or she is your best friend, lover, family member or pet Iguana. If that person looks bad, you look even worse. I learned that hard when I helped someone get signed to one of the major dance agents in NYC WITHOUT THE NEED TO AUDITION!  I really wish I learned that “Do not feed pearls to swine ” bit before I decided to be that generous. He did nothing to show his appreciation to me or any reason why he deserved to be signed when so many others would have killed to be with that agent. I had to help him with his really pathetic resume and yes it was pathetic. That was one of the worse friendships ever that lead to burnout. Never again!!! Although, I did not follow my own advice two years later when I hired and fired a friend from a dance project I was hired to project manage. I forgive them, but I know better now.  I would also advise others to have thick skin and know who they are or they will be eaten alive. If you know you are a naive person to fall for anything, you might need to check yourself. There are a lot of VULTURES  in this industry that pretends to be The Dalai Lama, Mahatma Gandhi, The Messiah, and other sorts of Humanitarians or all of the above to show you they are really just acting fake as botox, wicked and will enjoy to break you down to build themselves up. It is sad that we have so many hypocrites that make complaints. I am not saying there are not many people who nurture their positive side, but it can be hard to tell at times. We really need to be the change we wish to see and encourage others to do the same thing by words and example.

Dance Mogul: How did you get into instructing Zumba?
Mr.Romanoff: My long-time friend, Adalice Burgos, in Lebanon, PA (surprised I even made any friends in that town), encouraged me to sign up and join her for the Instructor Training Workshop in June 2012. She was requested to her license for a Gym in that town. She did not want to travel for the instructor training in Atlantic City by herself, plus we were like the Bonnie and Clyde of Fitness, minus the bank robberies. Plus she told me there is no other person she could have chosen to do this with, but me. So sweet! I was so hesitant at first, but I am glad she pushed me into it. I swear one of the biggest changes in my life because I finally did something for myself in a very long time. When we got our licenses we celebrated by killing our diets! Pizza and Roy Rogers! HAHA! Adalice is going to read this part and laugh, “You sold us out!!” HAHAHA! I love her! 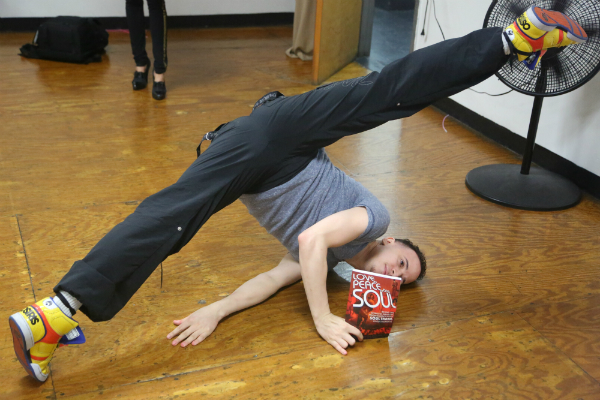 Dance Mogul: Do you think street dance styles should be organized like Zumba so people should have to be certified to teach and pay memberships?
Mr.Romanoff: NO WAY JOSE! Just to correct as my Instructor Trainer (Loretta Bates) told me and my fellow classmates, there is NO SUCH THING AS A Certified Zumba(r) Fitness Instructor. A Licensed Zumba(r) Fitness Instructor. Sadly there are people out there still getting that wrong. With Zumba(r) Fitness’ creator Beto Perez still alive, he can inform us what a licensed instructor should and should not do along with what makes and does not make a Zumba(r) Fitness Class. Zumba(r) has been very smart in documenting their craft so none of us can stay permanently confused.

In the Street Dance Community, WE NEED A TIME MACHINE!  The history is just over the place. If only the originators came up with a really good system to document these creations before so many of these power, money and status-hungry fiends rained on their parade. There are so many greedy opportunists and so-called ‘OJs’ and ‘legends’ taking claims and showing so much of their shady side when it comes to sharing their so-called knowledge of these awesome styles. I really do not know who to trust, especially since a lot of them (I repeat) do not have their history together. I am really happy there are people out there who are doing their best to honestly share their knowledge and build so much respect for their art form, but Certifications for Street Dance Styles? NO WAY! Who knows, maybe my mind will change later.

Dance Mogul: What are the goals you hope to accomplish with dance in the next couple of years?
Mr.Romanoff: I need to figure them out.  I did not allow myself anytime to do so before and after I just returned to NYC. I was away for almost 2 years with my MOM and Lola (Grandmother in Tagalog – the universal Filipino language) in Lebanon, Pennsylvania after I slipped into a major depression in 2011. What is important is I am back now and I see myself doing great things. Hopefully in another interview, we get to learn what I accomplished as I am ready to be ON FIRE!

For more on Jo Jo Check out: