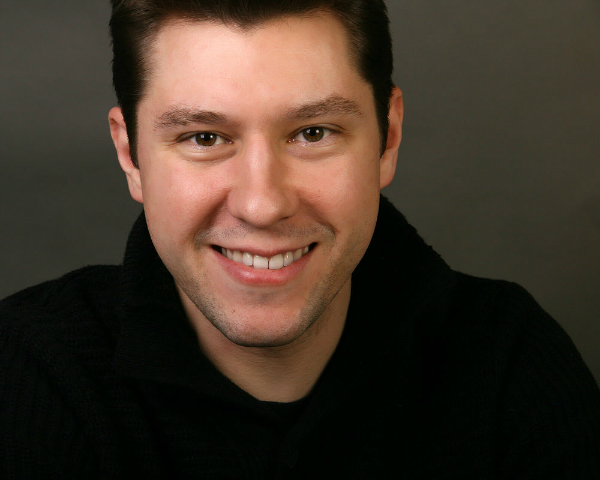 Justin Boccitto is a graduate of Broadway’s Circle in the Square Theatre School and trained under Michael Blevins for 15 years. As an instructor of tap and theater dance,  Justin serves on the faculty at Broadway Dance Center and guest faculty at Steps and the Juilliard School. Justin is director of The Choreographer’s Canvas, an annual event for choreographers around the world. He also serves as Executive Producer of The Group Theatre Too. Dance Mogul Magazine is honored to present the Discipline, Dedication, and Determination of  Justin Boccitto. Throughout the interview, we were able to see Justin was more than just someone doing and teaching the craft, but someone that is a leader in the craft as well. We hope his words inspire and empower you to be great.

Dance Mogul: When did you discover the passion for Tap?
Justin Boccitto: When I was ten years old my parents enrolled me in a program called the Centenary Young Performer’s Workshop in Hackettstown, NJ (my hometown).  The director of the program, Michael Blevins, had worked on Broadway and trained several tap dancers including Savion Glover and Jimmy Tate.  He had also worked with other artists such as Bob Fosse, Joe Layton, and Danny Daniels.  He introduced me to tap dancing.  One of the first production we worked on was SINGIN’ IN THE RAIN.  I played Don Lockwood, the Gene Kelly role, and Blevins insisted on recreating the original film choreography.  That’s really when my tap dancing career began.

Dance Mogul:  Were your parents supportive of you?
Justin Boccitto: Yes.  My father is a musician and had a small recording room in our basement, right next to my bedroom.  He understood the passion I had for dance and compared it to his love for music.  My mother was also supportive and did everything in her power to help me fulfill my dreams.  I had tried playing sports early on but after scoring a goal for the opposing team my parents realized I wouldn’t have much of a soccer career. 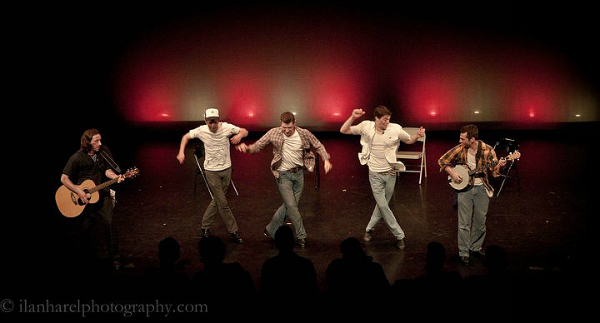 Dance Mogul: How many hours of practice would you put in?
Justin Boccitto: The Centenary Young Performer’s Workshop met every Saturday from 9 am to 10 pm.  We rehearsed 3-5 full-scale musicals and performed them in repertory.  When it came to my tap dancing I would rehearse anywhere from 10-12 hours a week.  I remember having a hard time with pullbacks.  I worked on them every day for an hour for 3 weeks in my basement until I finally mastered them.

Dance Mogul: Who were some of your early tap inspirations?
Justin Boccitto: Gene Kelly and Fred Astaire were my first.  George M. Cohan and Donald O’Connor as well.  Then Michael Blevins introduced me to tap teacher, Bettye Morrow.  I began studying the styles of the Copasetic.  Especially Bubba Gaines and Honi Coles.  I also really liked Paul Draper.  I enjoyed learning both the traditional “Broadway” style as well as hoofing and merging them together to create my own technique and aesthetic. 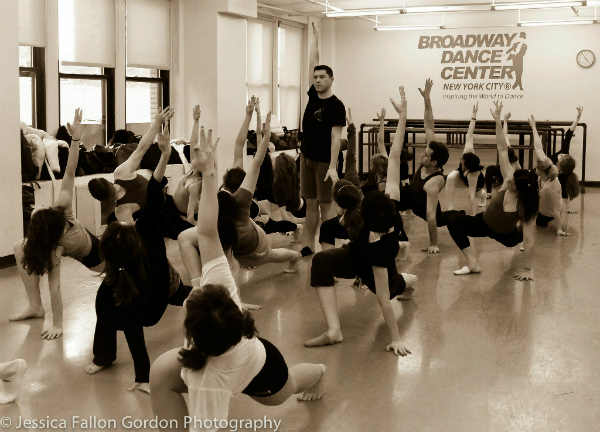 Dance Mogul: How did you go from a dancer to Choreographer/Instructor/ Director?Justin Boccitto: When I was 17 years old I realized I needed to make more money if I planned to move to NYC.  With a push from Blevins, I started teaching my own private lessons around my hometown.  I would drive to student’s homes and teach in basements, garages, porches, anywhere I could.  Through these lessons, I raised money to move to Manhattan.  I attended Circle in the Square Theatre School and went on to have a successful performing career while also teaching at dance studios and programs throughout the area.  After a while a realized I also had a passion and interest in directing, choreographing and producing.  In 2003 Blevins and I formed the theatre company, The Group Theatre Too (GTT).  Through this group, I was able to fulfill my need for working on the other side of the table.  I also started directing at Circle in the Square Theatre School which gave me exposure for other job opportunities.

Dance Mogul: Can you tell us what it’s like to arrange the different performances you have been apart of and directed.
Justin Boccitto: It’s stressful but very rewarding.  The shows The Group Theatre Too produces are completely organized by myself and Michael Blevins. GTT produces several different kinds of productions, everything from dance concerts, musical revivals, new plays, cabarets, one-act festival, and educational programs.  One of our most popular projects is the Choreographer’s Canvas (www.choreographerscanvas.com) which performs this year on May 18th at The Manhattan Movement and Arts Center.  The Canvas showcases 15-20 choreographers who have been selected by a panel of industry professionals.  We choose all styles of dance including Jazz, Tap, Ballet, Contemporary, Hip Hop, Aerial, Swing, Ballroom, etc.  The Canvas requires a lot of coordination with the choreographers as we provide them with the venue, publicity and also lighting designer to help enhance their work. 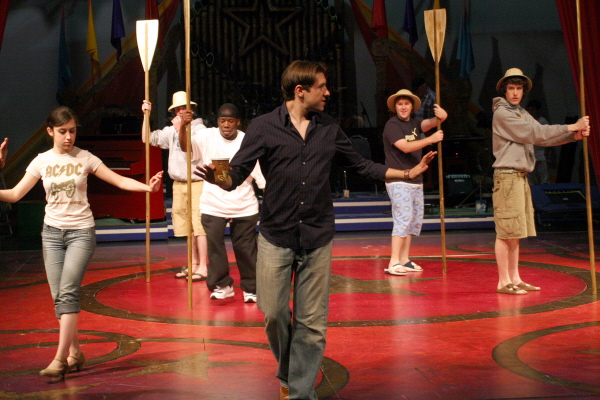 Dance Mogul: What was it like to work with Lady Gaga.
Justin Boccitto: I worked with Stephanie Germanotta, aka Lady Gaga, while she was attending Circle in the Square’s Summer Intensive.  I was her tap instructor for the 2-month program.  She was a talented, passionate student and did very well in class.  She, obviously, also excelled in her vocal technique and interpretation classes.  I’m so impressed and proud of her career thus far and continue to wish her the best.

Dance Mogul: Do you feel Tap needs more big-screen exposure?
Justin Boccitto: It would be nice to see tap more exposed to film and television but I believe it’s become such a specialized art form that only certain people can perform it extremely well.  This is why they don’t have tap as a discipline on So You Think You Can Dance.  It is hard to teach it quickly, even to proficient dancers trained in other styles.  But, everyone loves tap dancing.  Thankfully recent artists like Savion Glover and Gregory Hines helped the resurgence of Tap on Broadway and in the film but we haven’t seen much of it in the past five years.  Perhaps one day there will be a reality show where ordinary people have to learn how to tap dance.

Dance Mogul: If you had a chance to tap with any of the tap legends who would it be and why?
Justin Boccitto: Paul Draper and Fred Astaire.  Mostly because they were real workhorses and brought a very special style and charm to the art form.

Dance Mogul: What advice would you have for kids that were interested in tap?
Justin Boccitto: Find a teacher that makes you feel comfortable but also pushes you.  Also, make sure they don’t go too fast and really break down the steps and explain what they mean.  In the beginning, it’s important to stick with one instructor until you get the foundations.  Then you can explore other styles and teachers.  Go to tap jams, improv to music, practice with other tap dancers, read books, watch videos, learn about the masters who have come before you, and always keep studying.

Dance Mogul: If you had creative control of Dance Mogul Magazine what 5 Tap dancers would you want to see on the cover from past to present?
Justin Boccitto: George M. Cohan, Fred Astaire, Eleanor Powell, Jason Samuels Smith, Michelle Dorrance (if there is a sixth, I guess myself 🙂

Dance Mogul:  Is there anyone you want to thank for helping you on your journey?
Justin Boccitto: I’d like to thank my first teacher and mentor, Michael Blevins.  I’d also like to acknowledge Bettye Morrow, Larry Crabtree, Theodore Mann, Colin O’Leary, and Crystal Chapman.  Crystal is the reason I am a faculty member at Broadway Dance Center.  Finally, my wife Cristina who continues to support me in all my endeavors.

The Choreographer’s Canvas from The Group Theatre Too on Vimeo.