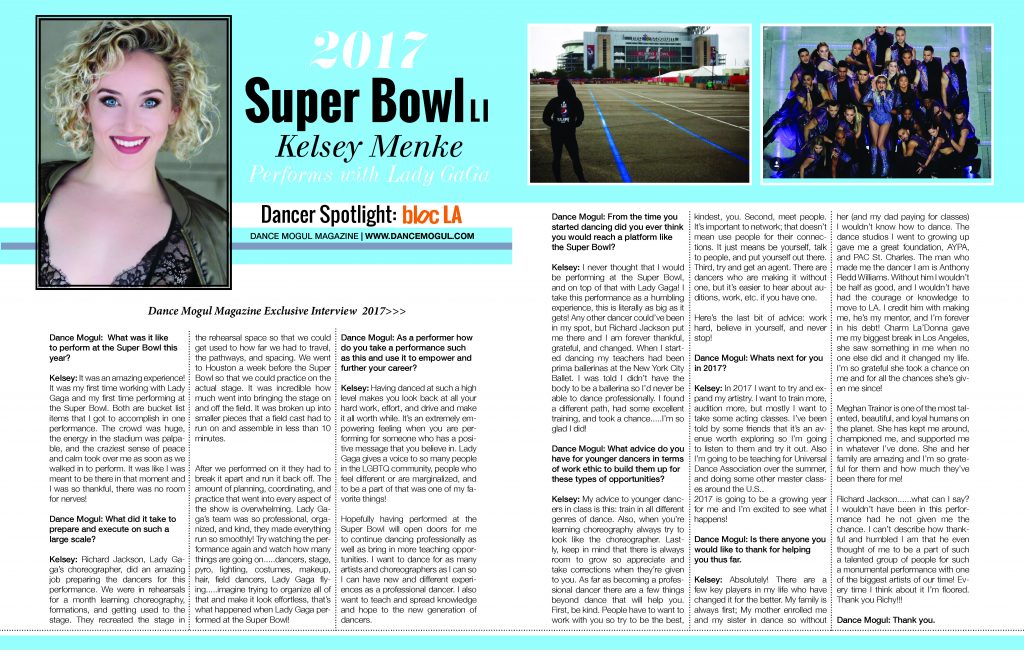 Dance Mogul:  What was it like to perform at the Super Bowl this year?
Kelsey: It was an amazing experience! It was my first time working with Lady Gaga and my first time performing at the Super Bowl. Both are bucket list items that I got to accomplish in one performance. The crowd was huge, the energy in the stadium was palpable, and the craziest sense of peace and calm took over me as soon as we walked in to perform. It was like I was meant to be there at that moment and I was so thankful, there was no room for nerves!

Dance Mogul: What did it take to prepare and execute on such a large scale?
Kelsey: Richard Jackson, Lady Gaga’s choreographer, did an amazing job preparing the dancers for this performance. We were in rehearsals for a month learning choreography, formations, and getting used to the stage. They recreated the stage in the rehearsal space so that we could get used to how far we had to travel, the pathways, and spacing. We went to Houston a week before the Super Bowl so that we could practice on the actual stage. It was incredible how much went into bringing the stage on and off the field. It was broken up into smaller pieces that a field cast had to run on and assemble in less than 10 minutes. After we performed on it they had to break it apart and run it back off. The amount of planning, coordinating, and practice that went into every aspect of the show is overwhelming. Lady Gaga’s team was so professional, organized, and kind, they made everything run so smoothly! Try watching the performance again and watch how many things are going on…..dancers, stage, pyro, lighting, costumes, makeup, hair, field dancers, Lady Gaga flying…..imagine trying to organize all of that and make it look effortless, that’s what happened when Lady Gaga performed at the Super Bowl!

Dance Mogul: As a performer how do take a performance such as this and use it to empower and further your career?
Kelsey: Having danced at such a high level makes you look back at all your hard work, effort, and drive and make it all worthwhile. It’s an extremely empowering feeling when you are performing for someone who has a positive message that you believe in. Lady Gaga gives a voice to so many people in the LGBTQ community, people who feel different or are marginalized, and to be a part of that was one of my favorite things! Hopefully having performed at the Super Bowl will open doors for me to continue dancing professionally as well as bring in more teaching opportunities. I want to dance for as many artists and choreographers as I can so I can have new and different experiences as a professional dancer. I also want to teach and spread knowledge and hope to the new generation of dancers.

Dance Mogul: From the time your started dancing did you ever think you would reach a platform like the Super Bowl?
Kelsey: I never thought that I would be performing at the Super Bowl, and on top of that with Lady Gaga! I take this performance as a humbling experience, this is literally as big as it gets! Any other dancer could’ve been in my spot, but Richard Jackson put me there and I am forever thankful, grateful, and changed. When I started dancing my teachers had been prima ballerinas at the New York City Ballet. I was told I didn’t have the body to be a ballerina so I’d never been able to dance professionally. I found a different path, had some excellent training, and took a chance…..I’m so glad I did!

Dance Mogul: What advice do you have for younger dancers in terms of work ethic to build them up for these types of opportunities?
Kelsey: My advice to younger dancers in class is this: train in all different genres of dance. Also, when you’re learning choreography always try to look like the choreographer. Lastly, keep in mind that there is always room to grow so appreciate and take corrections when they’re given to you.  As far as becoming a professional dancer there are a few things beyond dance that will help you. First, be kind. People have to want to work with you so try to be the best, kindest, you. Second, meet people. It’s important to network, that doesn’t mean use people for their connections. It just means be yourself, talk to people, and put yourself out there. Third, try and get an agent. There are dancers who are making it without one, but it’s easier to hear about auditions, work, etc. if you have one.  Here’s the last bit of advice: work hard, believe in yourself, and never stop!

Dance Mogul: What’s next for you in 2017?
Kelsey: In 2017 I want to try and expand my artistry. I want to train more, audition more, but mostly I want to take some acting classes. I’ve been told by some friends that it’s an avenue worth exploring so I’m going to listen to them and try it out. Also, I’m going to be teaching for Universal Dance Association over the summer and doing some other master classes around the U.S.  2017 is going to be a growing year for me and I’m excited to see what happens!

Dance Mogul: Is there anyone you would like to thank for helping you thus far.
Kelsey: Absolutely! There are a few key players in my life who have changed it for the better.  My family is always first; My mother enrolled me and my sister in dance so without her (and my dad paying for classes) I wouldn’t know how to dance. The dance studios I went to growing up gave me a great foundation, AYPA, and PAC St. Charles. The man who made me the dancer I am is Anthony Redd Williams. Without him, I wouldn’t be half as good, and I wouldn’t have had the courage or knowledge to move to LA. I credit him with making me, he’s my mentor, and I’m forever in his debt!  Charm La’Donna gave me my biggest break in Los Angeles, she saw something in me when no one else did and it changed my life. I’m so grateful she took a chance on me and for all the chances she’s given me since! Meghan Trainor is one of the most talented, beautiful, and loyal humans on the planet. She has kept me around, championed me, and supported me in whatever I’ve done. She and her family are amazing and I’m so grateful for them and how much they’ve been there for me! Richard Jackson……what can I say? I wouldn’t have been in this performance had he not given me the chance. I can’t describe how thankful and humbled I am that he even thought of me to be a part of such a talented group of people for such a monumental performance with one of the biggest artists of our time! Every time I think about it I’m floored. Thank you Richy!!!