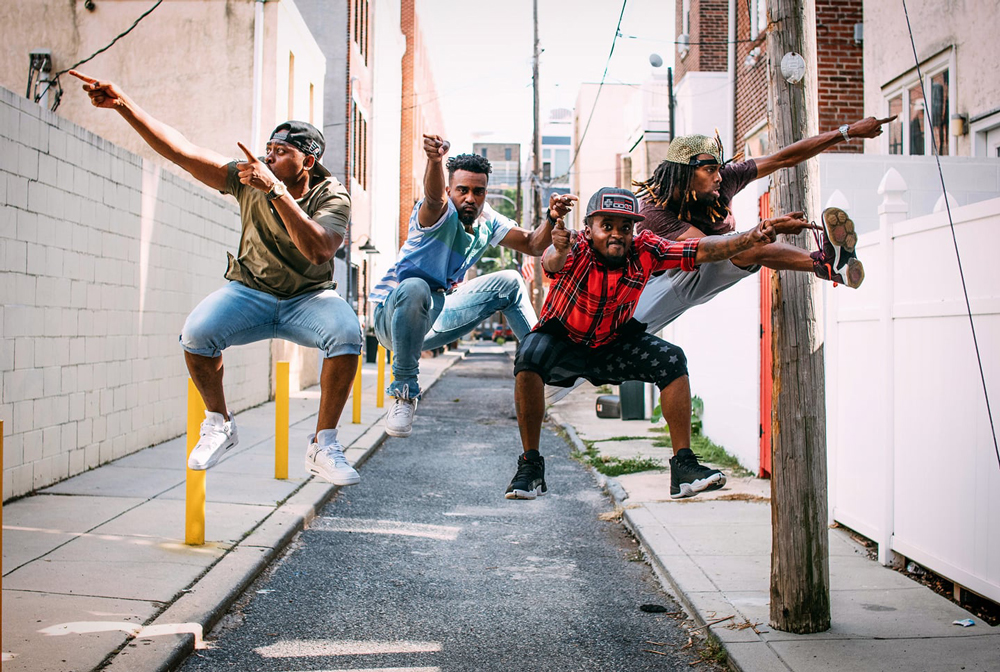 Dance Mogul: First and foremost how are you doing during the pandemic and riots?
Ricky Evans: I’ve been trying to manage my time and mental space as best as possible during the pandemic. Like most teachers and studios, all my classes have moved to online now. It was a big adjustment when this first started, but I think I’ve found the rhythm for it. There’s always that nervous energy before doing an online class, but it fades once you get into it. This pandemic has put a pause on the world that we’re used to. So there are fewer external distractions that allow me to focus on important things like family, self-worth, and future plans. The riots, protests, and all issues related to racial injustice is a double-edged sword for me. It has motivated me to speak up and be a bit more proactive in raising awareness and educating those that take Hip Hop classes with me. I joined the protest in Philly to support the solidarity in this fight against racism. It has also been exhausting to see the effects of all these incidents. The ugly, yet inevitable side of this war is emotionally taxing, and sometimes a drain on me physically. But still every day, I find a reason to get up and do something to combat that.

Dance Mogul: What advice do you have for the survival dancers at this current time?
Ricky Evans: Focus on your goals, your business, and the direction that you want to be headed in once the world opens back up. This has been the perfect time for me to focus on my craft. I don’t have to be in nearly as many places as I used to be, so I have the time to actually seek out education and train. All you can do in these moments is to prepare yourself to be better than who you were before the pandemic. It’s also a good time to read books, try new things, draw in a deeper spiritual connection, etc. As a dancer, keeping your mind healthy during these times will enhance your creative and artistic abilities. It should make you a better performer or teacher because you’re drawing your energy from within to express your art or voice.

Dance Mogul: How did the opportunity of American Soul come out?
Ricky Evans: The producers of the show had reached out to Flo Master first. This was at the end of August last year. They wanted to feature The Lockers in the show, as their contributions and connection to Soul Train was highly influential and noteworthy. Flo Master was unable to be a part of it because of prior engagements, but he told him he knew the right people for the job. Flo Master has been a long-time friend and inspirational figure for The Hood Lockers. He contacted Marcus Tucker, co-founder of The Hood Lockers, and told him about the opportunity. We basically had to make our way down to Atlanta within a week’s notice to audition for the role of The Lockers in one of their iconic Soul Train performances. Marc called us (Andrew Ramsey, Joshua Polk, and myself), told us about the opportunity, and we immediately started figuring out what we were going to have to do to get down to Atlanta. We put our pennies together and drove down there to meet with some of the people behind the scenes, not just to audition for dancing, but speaking roles as well. It was Marc who landed the role of Don Campbellock Campbell, rightfully so, and we were designated as Lockers along with Lamont Chapman, Beejay Harris, and Mrs. Goldie Lox (I can’t recall her real name, I just remember her dance name.) It was a great experience for all of us. We are all Locking enthusiasts, and we’ve been studying and training for most of our dance careers in this style, and there’s no better way for that to pay off than a chance to actually portray them on television.

Dance Mogul: What did Don Campbelllock Campbell mean to you and your crew?
Ricky Evans: Without Don, there would be no Hood Lockers. Not only because of his unintentional creation of this dance style but because of his consistent influence and emphasis on individuality and expression within what he created. This message helped us find our own voice, approach, and style. We’ve studied all of The Lockers, and have learned from a few of them in person, but Don was always the main source of our inspiration. We’ve been fortunate enough to perform for him in our own tribute show, as well as part of the musical, Rennie Harris’ Funkedified. Every time we were able to see him in person it was always a refresher for our spirit. We were all devastated when we found out about his transition, it felt like a part of us left this world too. It is still hard to cope with at times, but we do our best to keep his spirit alive every time we put on those stripes.

Dance Mogul: What do you think the future of dance will be in the next 5 years?
Ricky Evans: The future of dance will have a greater online presence, but I also think more dancers have been using these platforms to connect with more dancers from around the world. Being grounded has made me appreciate the value of being out and experiencing life beyond our phones and technology. I miss it. Most of us have made the efforts to reach out to people, have discussions, online sessions, and build connections that will hopefully only grow stronger once travel opens back up. We’ve been so comfortable being in our own spaces and passing up chances to connect with people in person, and with that being taken away from us, we truly understand the value. These are just my own thoughts, but it is also a huge and very optimistic hope.

Dance Mogul:  What do you want your legacy to be?
Ricky Evans: Since I started dancing, I have always tried to find my voice and place in this world. Once I started taking dance seriously, I wondered what the future of my career would entail. My experiences thus far have given me a bit of clearer picture, although it is nowhere near complete. I want to be the inspiration to other people like how others have done for me. Dance saved my life in many ways. It has given me a sense of purpose. There is a necessity for dance and cultural education in today’s society. So many people are looking for ways to express themselves in effective ways that help them and in turn help their community. I just want to be one of those people that help others find their inner light and succeed in life to their full potential. I want my legacy to go beyond just dance because dance is only a part of my life’s journey. It is through dance that I have learned so much more about myself and have used that to spread goodness and inspire greatness. I’d be satisfied if anyone that has learned from me, or watched me dance and got to know me would do the same.

Dance Mogul: Is there anyone you want to thank for helping you on your journey?
Ricky Evans: First and foremost, I have to thank the crew that I came up with: Face Da Phlave (Marcus Tucker, Andrew Ramsey, Joshua Polk, Brice Johnson, Kenny Thomas, Derek Gaines, Renee Collazo, Richie Collazo, Maria Young, and Marshall Fleming). I don’t know where I would be in dance if it weren’t for them. Most of the lessons that I have learned have either been from or alongside them. They were already a movement before I got there, and they welcomed me into the crew with tough love, rigorous training, but most importantly…motivation. Motivation to better my self through practice, seeking out knowledge, and teamwork. Rennie Harris, Moncell Durden, Clyde Evans Jr., YNot, and James Colter are hometown legends in the game that have dropped so many gems and information on a personal level and have really paved the way in my early and later journey. Don Campbell, Dennis Danehy, Suga Pop, Popin Pete, Tweet Boogie, Buddha Stretch, Henry Link, Sekou Heru, Tony McGregor, Caleaf Sellars, Ejoe Wilson, Loose Joint, and Toni Basil have all helped in so many ways through their support of The Hood Lockers, but also through their encouragement, and positive reinforcement beyond the technical and historical lessons. I have learned something from all of these people (and I may be forgetting some, apologetically) and without them, I wouldn’t be able to reach my students so effectively. Any dance studio owner that has ever given me an opportunity to teach has also helped me. Their trust in me has not just helped me personally, but it has also helped spread the information of the pioneers to kids and adults who may have never found a way to access it on their own. My list could go on because my journey has been influenced by so many. I think we all learn from each other, so if we’ve ever crossed paths, I’m sure there has been an exchange in empowerment.