Dance Mogul: What coping skills did you use to help you with the trauma in your life?

Robert Cecil Brooks: I used isolation, going to clubs, parties and having lots of sex as a way of coping after I had found out that I was HIV positive. Most of these were sadly chosen coping mechanisms that masked my pain temporarily. Then, a year later, I was given a 3-year scholarship that lasted for 6 years to go to school for Hip-Hop Dance education in NYC. Upon me taking the scholarship, my habits were masked and I focused more on my career and the arts. Years later, when I broke up with a man I considered my domestic partner by law in 2012, I was extremely at another low. I did not know how to identify myself, because I thought everything he did or I did, we both were attached to. I thought we had to do everything together with each other, so when it was time for us to part and go our separate ways, it was difficult for me to identify who I was again. I started out with the same mode of thought and patterns from previous devastations by engaging in lots of sex to mask the fact that I wanted to be with another person–just not only in the magnitude or for sexual purposes. I also stayed to myself, mainly because I was too angry to want to talk to other people, except my psychotherapist. I went to clubs and parties to also fill that void of the missing person in my life. I went to clubs searching for the next partner. A few months later, I joined a few intervention groups at GMHC called 3MV (Many Men, Many Voices) and Choices=Healthy Relationship. After joining both of those groups, I then gained healthier habits such as reading, spending time with family and friends, writing and dancing. At the time, I was in a Repertory Company; however, I chose to take outside classes and other work. These new choices helped me to develop a better sense of self that was always a part of me that I did not consistently see.

Dance Mogul: What advice would you have for parents to help their kids deal with trauma at a young age?
Robert Cecil Brooks: The advice I will give to parents is to be as open as possible. Parents should be open and receptive so that their children can feel comfortable enough to divulge their feelings and information to them. However, being open doesn’t mean that the parent has to pretend or even be their child(ren)’s best friend, because that can lead to a destructive relationship if not monitored or handled with care. Parents, be patient with your children while giving them the love and support they deserve and need.

Dance Mogul: Does your passion for dance keep you alive?
Robert Cecil Brooks: My passion for dance does not keep me alive. It is one of the fuels within my life that allows me to keep pushing. What keeps me alive are my beliefs in a Higher Power. I know that I have been put on this Earth to make a contribution to this world, just like everyone else. However, there are so many things that inspire me to focus on the various aspects of our society, such as Misogyny & Gender Equality, Gay-Bashing/Hate Crimes, Proper Parenting/Child Care, Education, and Dance Education. These various aspects are the main components in my life that I am fueled by.

Dance Mogul: Based upon your positive results, how can you help others when it comes to the knowledge of the HIV virus?
Robert Cecil Brooks: Usually HIV is stigmatized as a very sensitive topic. However, when it comes to helping others about the knowledge of HIV, I speak from a lens of one who has been properly educated about the virus. I am currently doing that with a Community Based Organization called BOOM! Health. At BOOM! Health there are several different programs offered throughout the agency that is located in the Bronx that has three official sites: the main office, prevention center, and harm reduction site. I work at the prevention center with the Men’s Health Department and the YMSM Programming. I facilitated two intervention Bronx Mpowerment Cycles in 2012 & 2013, along with one cycle of a Trans-Experience Mpowerment Project Group.

In a nutshell, I consistently talk about communication and partner notification when it comes to talking about HIV, sex, and relationships because it is extremely important to be on a consistent and leveled understanding before engaging in sexual activities with one or more partners. The help comes from me not being afraid to talk about it, and also giving people the free space to engage with me in a conversation about HIV. Sometimes it is not always easy for people to talk about it. So, I have to be receptive and open to others so that they receive the knowledge or experience I have to offer.

Dance Mogul: What are your goals and what are your dreams if money was no objective and you had all the resources you needed?
Robert Cecil Brooks: My goals are to be a part of a community-based organization, or organizations, that create social change by focusing on dance as a medium to get people into shape and to talk about HIV/AIDS or other STI’s/STD’s preventative measures. My dream is to create a Dance Company and Repertory Company that allows the community to see the relationship between all people. I would like to see people who look just like me and have similar experiences that are not often shared through the art of dance.

Dance Mogul: If you could be a part of a dance movement to solve social problems, what problem would you dance for in order to bring awareness to it?
Robert Cecil Brooks: I would tackle stigma in regards to homophobia, rights of the LGBT Community and the love between same-gender lovers. There isn’t enough art that represents the relationship aspect, struggles or successes in regards to ALL, especially the LGBT Community.

Dance Mogul: Should dancers be certified to teach workshops? If so, by whom?
Robert Cecil Brooks: Since Modern Dance and especially Ballet have been codified, there is a level of hierarchy within both forms to delegate who should teach who and what forms of dance. Usually, within the Hip-Hop Dance community, there is still a lot of progression in terms of who should teach what and who should teach who. However, I think there should be several other dance legends and pioneers to certify dancers to teach workshop specifically, Tyrone “The Bone” Proctor, Ana “Lolipop” Sanchez, Don “Campbellock” Campbell, Kwik Step, Ana “Rokafella” Garcia, Boogaloo Sam, Popin Pete, Buddha Stretch, Robin Dunn, Bev Brown, Tweet Boogie, Excel Garner, Anthony “El Neo” Tirado, The House of Ninja, The House of Extravaganza, The House of Mizrahi, Cesar Valentino, The House of Karma, Karma Kollective: Walking Art, Mr. Wiggles, Peaches, Dynamic Rockers, Kid Dynamo, Rock Steady Crew, Master Mind Rockers, Archie and many more that I may have forgotten to mention.

Dance Mogul: Who would be the people to certify them?
Robert Cecil Brooks: I think first all of the pioneers and creators of specific art forms should sit down and discuss who created or inspired many of the forms of dance we are dancing to today.

Dance Mogul: What kind of dance-related businesses would you like to see in the future?
Robert Cecil Brooks: I would like to see more schools for the arts. I would like for more established artists/performers to team up with other artists who have well-written plans to create schools and programs centered around the arts. I’m speaking primarily of the Cultural Invention of Hip-Hip, which includes Graffiti, Djing, MCing, Hip-Hop Dance and overstanding Knowledge.

Dance Mogul: Do you feel that eating the right foods can help a dance why?
Robert Cecil Brooks: Yes. Eating healthy is a large part of our survival. People, in general, need to eat right. But, it is most important for dancers and athletes to have a healthy diet, because they are putting their bodies through a process of build, break-down and repair. So if the body is continuously going through that process, the body needs to take in the proper nutrients so that it can be fueled in order to work properly.

http://www.youtube.com/watch?v=5ZqsICAHJUY
(Darlene and I Leading Warm-up @ The Hip-Hop Dance Conservatory)

Dance Mogul: Can a dancer benefit from meditation?
Robert Cecil Brooks: Dancers can definitely benefit from meditation. Usually, meditation helps one focus directly on the task. It’s about taking time out to be fully invested within the moment. I think originally human beings were created to multitask, execute, and be mentally in tune with everything that is going on around them.

Dance Mogul: What kind of information would you like to read about in a dance magazine?
Robert Cecil Brooks: I would like to read more about the social issues that are going on around the world. I would like to see how dancers and dance companies help to spread awareness of the world. As there are many dance companies, the dance should be more of a platform to present the various issues. 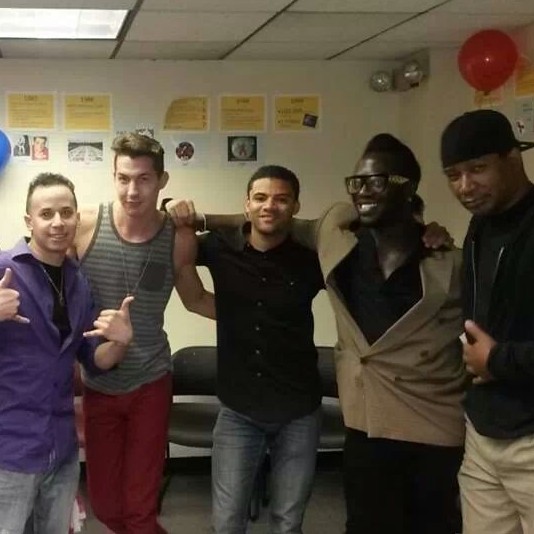 Dance Mogul: Is there anyone you would like to thank?
Robert Cecil Brooks: BOOM! Health’s F. E. A. R. Roundtable Discussion with Legendary Tyrone “The Bone” Proctor, Loveantics Blog Writer Javinne McCoy, Matthew Barrett Web Series Personality and Marathon Runner and last Community Leader and advocate Joseph Romanoff Thank you Dance Mogul Magazine for all you have done.
I would also like to thank Joseph Romanoff. He has been such a big support.