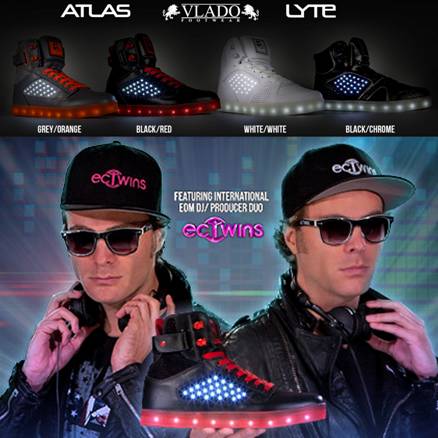 June 26, 2013 – Los Angeles, CA – Vlado Footwear has taken its love of music and sneaker fashion to the next level with the development of the LED Pack to drop exclusively in Finish Line retail stores mid-July. The LED Pack consists of two styles – Atlas (available in Gray/Orange and Black/Red) and Lyte (available in White/White and Black/Chrome).
As the self-proclaimed hottest sneaker pack to resonate with the music and nightlife scene this summer, Vlado Footwear celebrates its presence by collaborating with international EDM DJ/Producer Duo, EC Twins (www.ectwinsmusic.com) to create the #LEDPack Fan Experience. As the official brand ambassadors of the LED Pack, the EC Twins will participate in several experiences to excite music and sneaker fans such as giving away a FREE download of their new track “Hot Summer Nights” by EC Twins/Lea Luna/Nejat Barton (courtesy of Black Hole Recordings) with the purchase of any LED Pack style (a music download card will be packaged in each shoe box).
The Lyte style (White/White and Black/Chrome) is featured in the new music video for the song “Hot Summer Nights” which releases July 1st on Black Hole Recordings and clips of the music video is also featured in the LED Pack web commercial hosted on Vlado Footwear’s YouTube page (http://youtu.be/UNsk-VEdi0Y). 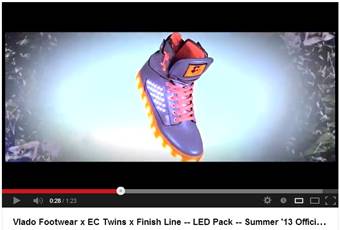 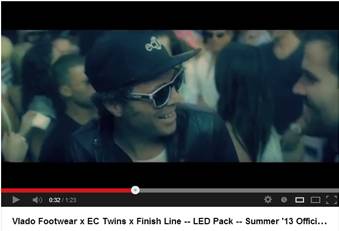 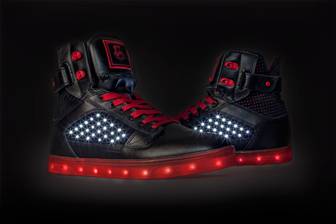 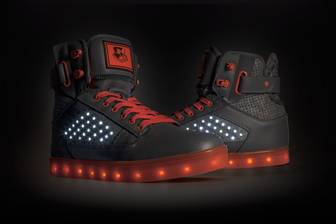 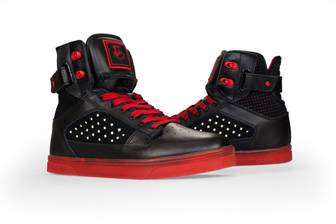 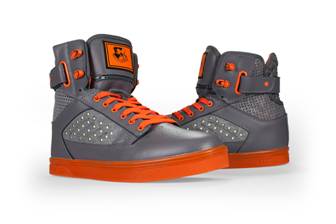 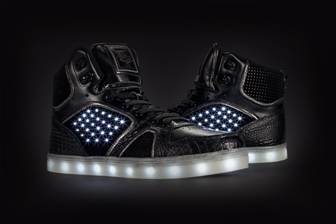 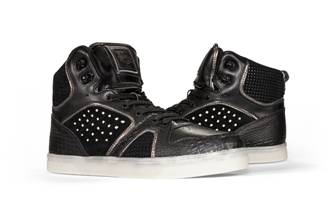 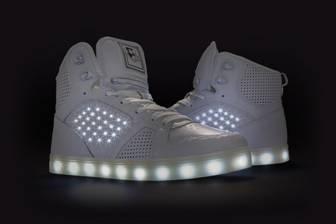 ###
About Vlado Footwear
Founded in 2003, Vlado Footwear started with a handful of classic styles for men, called Luxury Kicks. Our brand achieved instant success by obtaining placement in several publications, Footwear Plus, The Source, XXL, Antenna and landing on the cover of Footwear News, who proclaimed Vlado Footwear as a brand to watch.
Celebrities soon flocked to Vlado, Snoop Dogg, Oscar-winner Jamie Foxx, Chris Brown, Ne-Yo, Bobby V., Midnight RED, Justin Beiber, the cast of the CW’s The Vampire Diaries and several others. Vlado footwear quickly became the choice of fashion stylists and wardrobe departments for TV shows like America’s Best Dance Crew, American Idol, So You Think You Can Dance, Nickelodeon’s Gigantic, Disney’s Shake It Up and the Grammys.
Since its inception, Vlado Footwear has always stuck to our credo of producing innovative items using avant-garde materials. The innovation of new production techniques and development and resourcing of new materials has separated us from the competition. Following this recipe and the desire to stay ahead of the trends has lead to the development of a new women’s collection. We are now in development of an accompanying apparel line, further establishing Vlado as a lifestyle brand.
From bold vision to exceptional reality, Vlado Footwear maintains its underground cult status by continuing to produce highly sought-after athletic footwear, known for performance and style. Celebrating our 10th year, Vlado promises more exciting things to come from the brand that has excited everyone from day one. We continue to be the brand that fits into the lifestyles of individuals with fashion forward minds.
For marketing & PR inquiries, contact Dae Bogan at [email protected].
0 0
Dance Mogul June 30, 2013
No Comments Yet