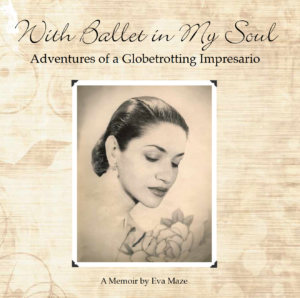 Dance Mogul: What inspired a career for you in the arts?
Eva Maze: Growing up in Europe, I always liked the arts, whether it was classical music, painting or theatre. I especially loved ballet, which started as a child living in Bucharest, Romania, and continued through my studies in New York at Barnard College after my family and I moved to the United States from Europe prior to World War II. Because of an illness at an early age, I could not continue ballet training, but did resume it later in life in my early twenties with a Russian teacher in NY, who, in turn, introduced me to three ballet dancers overseas after my husband (who worked with Pan Am) and I moved to London and New Delhi. My life then took a different turn after arranging for these dancers – Marina Svetlova, Anton Dolin and John Gilpin – to go on tour with me through India. This started me on a career in the arts as a producer and an impresario and grew from there.

Dance Mogul: What are some of the obstacles you faced to pursue your passion?
Eva Maze: Initially, being very ill at an early age so that I could not pursue my passion of becoming a ballet dancer until much later in life. Later, once I embarked on the different career of impresario (which became a new passion), mostly learning about the business side of the profession (with its successes and failures) that included, among others, how to draw up good legal contracts, how to minimize risks, negotiating beneficial terms with artists and theatrical venues, developing a system for finding high caliber talent that would appeal to specific audiences, and being familiar with a particular culture and their history (where my European background and speaking number of languages came in handy). I never felt any obstacles to working as a woman in a male-dominated profession in Europe.

Dance Mogul: What did you see in yourself and the profession that others didn’t?
Eva Maze: I always had confidence in myself – probably instilled in me by my parents (I was also an only child, and always seemed to have their approval with whatever I decided to do). I was never afraid to tackle something new or different. Once I understood that it was too late for me to be an accomplished ballet dancer, and was then offered the opportunity of being part of the performing arts world (ballet, theatre, music etc…) – in a different capacity on the business side of the profession – I realized that it was just as fulfilling, or, for me, perhaps even more so. I had always been attracted to the arts in general, and very much enjoyed working with artists of all types. Producing, touring and representing artists came naturally to me, and it was especially gratifying when audiences (and the press) responded positively to the companies I presented in Europe – whether it was musicals like West Side Story, amazing dance companies, such as Alvin Ailey, ensembles that revolutionized theater like the Living Theater, or unique singing groups like the Swingle Singers. It was also satisfying to know that I could be financially successful at a profession that few if any, women were engaged in at that time (I think being a woman in a man’s world was actually an asset then). After learning from a few mistakes early on in my impresario career, I think I developed a 6th sense for what would do well in Europe (which is where I worked primarily), and the mostly good reviews (and accolades) I received from both the press and the public only reinforced my self-confidence.

Dance Mogul: With everything going on now in the US as far as immigration. What insight would you offer to the world, in terms of looking past where we all are from, but focusing on the gifts we all have to offer?
Eva Maze: I am absolutely heartbroken about what is currently transpiring in the United States, and at my advanced age, just cannot understand it. Living among so many different cultures for so long, and working with so many gifted international companies abroad gives you a very different perspective on the variety of cultures that exist – and how wonderful they really are. Immigration (along with our constitution) is the bedrock of our country. So many brilliant ideas and artistic concepts have come from immigrants of ethnic, cultural, and religious backgrounds around the world! Other than those whose mission is to do harm there is simply no real reason to shut them out. The rich history of our music and dance is a fusion of so many foreign ethnic groups and immigrant cultures, be they Latino, Asian, European, Native-American, Mid-Eastern, Black or White. Our entire multicultural American society is the result of this unique blend and tapestry, and not only must it be protected and preserved, but it must also be welcomed and allowed to thrive at home. We are one world, one Earth, and all part of it, and all of us have contributions to make for future generations.

Dance Mogul: What have been some of your favorite productions to be a part of our produce?
Eva Maze: Among many others, probably the International Folklore Festival, which I produced for the 1972 Summer Olympic Games in Munich, Germany, and included 14 top folk dance companies from 12 nations around the world; the Alvin Ailey American Dance Theatre company, which toured with me twice in Germany and Europe in its early years, and enjoyed a record 80 curtain calls one evening in Hamburg, Germany; and the Swingle Singers, a unique vocal jazz ensemble known for a cappella scat singing of classical music, which went on to win a number of Grammys.

Dance Mogul: What are some of the greatest lessons the arts have taught you?
Eva Maze: That the arts (whichever one you choose) are a passionate expression of the soul, and as such, essential to human expression and survival; that they are an eloquent and all-important means of communication; that they lead to greater compassion, emotional intelligence, and understanding of the human condition in this world (and beyond); that they need to be encouraged and nurtured at all levels from a young age on, even if a person chooses a non-artistic path in life; that a career in the arts can be exciting and fascinating – and for some, the means to a successful profession. And above all, that they help you become more tolerant and sensitive to the world around you.

Dance Mogul: What would you like your legacy to be?
Eva Maze: That I was never afraid of overcoming obstacles or challenges – even when they seemed overwhelming – or venturing into new territory. That I was able to develop a vision with my business, International Artists Productions, that could entertain, enlighten and bring enjoyment to audiences around the world –especially in Germany, where I worked primarily. That I was successful at introducing to discerning European audiences, an eclectic variety of high quality companies and artists from the world of the performing arts and genres such as ballet, contemporary dance, folk dance, Broadway musicals, gospel, classical theater, modern drama, Japanese Kabuki, flamenco, classical music, orchestras, instrumentalists, vocal groups, opera, mime and cabaret – and that they were almost always welcomed with enthusiasm.

Dance Mogul: What advice do you have for the next generation?
Eva Maze: To select and plan your professional future wisely. To look to others who have preceded you in a particular career of choice (my source of inspiration was Sol Hurok, the pre-eminent impresario of the 20th century), and evaluate what they did right (and wrong). To be organized and focused on whatever you choose to pursue. To set goals, but be able to move the goal post if necessary (i.e. to remain flexible. To be open to other ideas and opportunities in case things along the way don’t work out as planned. To expect failures, but learn from them in a positive manner, and know that they are all part of the process. To be proud of being different or “other”, and aware that you will move mountains in your own way. Similarly, to accept those who are different from you and welcome their contributions as well. To dream big, but with a healthy dose of realism, for a path is always waiting for you: it may not always be the one you want, but it is there. To avoid compromising situations that could get you into trouble. To listen to those you trust and have your best interests at heart. To always believe in yourself and prevent others from beating you down. To understand that life is a balancing act with rewards and disappointments, but that, when one door closes, another will open up: just be patient and resilient, and you will succeed.

Dance Mogul: What do you hope people take away from “With Ballet in My Soul”?
Eva Maze: That it’s important to embrace the diversity of cultures and people on this Earth, and those who are different from you; to be tolerant and accepting of ideas that are beneficial not only to you personally but to society as a whole; to be familiar with as many different art forms as possible, be they in the visual, musical or performing arts worlds; to learn different languages, for they will connect you closer to foreign cultures; to be generous and grateful for what you have and what you have accomplished, as well as empathetic toward those who are less fortunate. Also to know that it’s OK to be different and pursue your dreams, even when facing obstacles; that it’s important to set goals, challenge yourself and applaud your uniqueness; and, above all, that you maintain a healthy sense of self and passion in whatever you decide to pursue.

Dance Mogul: Is there anyone you want to thank for helping you on your journey?
Eva Maze: My husband, Oscar (now deceased), who was my ‘rock’ throughout all my endeavors; my children and family, whom I am grateful to have around me, and of whom I am very proud; my close friends, who have been there for me throughout my life; and those people who, along the way, believed in me, supported my vision, and offered me opportunities that led to a successful career.